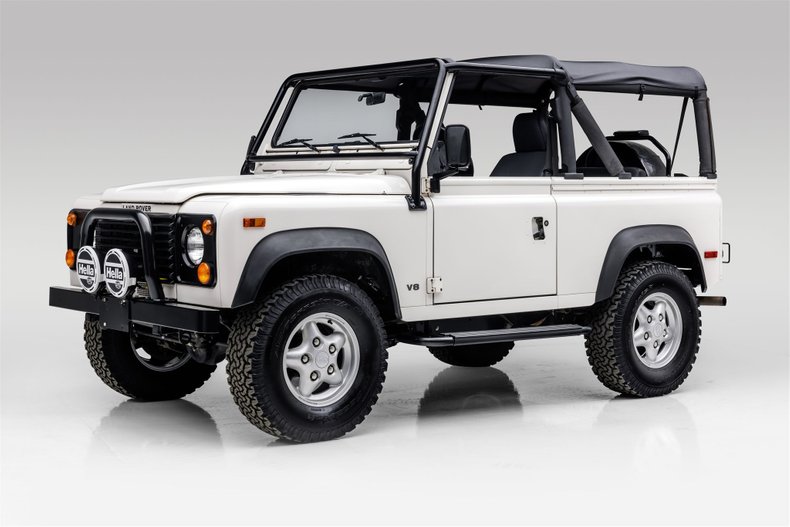 Thanks to careful ownership the paintwork remains in excellent condition throughout. The factory soft top has been replaced by a Stayfast open-air Surrey top. The interior is in great shape and features a two-spoke Land Rover steering wheel that frames a 120-mph speedometer, a tachometer, and additional gauges displaying coolant temperature and fuel level. A factory supplied air conditioning unit is fitted underneath the dash and blows ice cold. The audio system includes a Kenwood head unit paired with speakers mounted in the doors. 5-spoke Aluminum Alloy Land Rover wheels are fitted to BF Goodrich ll Terrain T/A tires (265/75/R16). New tires of the same make and size have been ordered and will be installed.

Powered by an aluminum 4.0-liter V8 that is factory rated at 182 horsepower and 233 lb-ft of torque paired with a four-speed automatic transmission and a full-time four-wheel-drive system with a dual-range transfer case. Equipped with a Safari cage, Hella auxiliary driving lights, air conditioning, Kenwood Stereo, side steps, and a steel front bumper. The side windows were removed upon entry into California but are included in the sale. Complete with metal side windows, spare tire, and the original 1997 Defender 90 manual. A unique opportunity to purchase a rust-free 1997 Defender 90 that is finished in a desirable color combination.

In accordance with Carfax this Defender-90 has had three total owners and has been titled/registered in Tennessee (owner 1), Wisconsin & North Carolina (owner 2), and California (owner 3). On March 19, 2020, The Fast Toys Specialists in Los Angeles, CA performed a gauge service which included replacing cluster carrier, replace dash molding, and repair cluster end caps. Subsequently, a full brake job was carried out with Brembo braking components that included all new rotors, brake pads, and the removal and reinstallation of the axle shafts. Lastly, all turn signals were refinished, clear coat was applied to the 7 rear lenses, and all fluids were check at a total cost of $2,656.00. On June 12, 2021, The Fast Toys Specialists were commissioned to remove the transmission with transfer case to replace rear main seal, reseal oil pan, service the transmission, replace fuel nose filler neck, power wash undercarriage, and detail the engine at a total cost of $3,585.00.

This model of the Defender was first introduced in 1984 and it was called the 90 after its wheelbase of 90 inches. Coil suspension became a standard on the 90 as well, replacing the outdated leaf spring suspension, allowing for a much smoother ride. In what Land Rover called North American Specification (NAS), the truck was arguably at its best. The V8 provided acceptable power than Jeep got out of an engine with two fewer cylinders. The coil springs delivered serious off-road ability. In 1997, it was fitted with the fuel-injected, 182 bhp 4.0-liter version of the old Buick alloy V-8, was good for 0-60 mph in 10.2 seconds, and was limited to a top speed of 86 mph. Base price was $27,900, but options including air-conditioning and every kind of off-road accessory could easily push it past $35,000. As the ultimate version of the original Land Rover, it proved capable of meeting just about every off-road challenge, and prices are still close to their original MSRP. Land Rover pulled the plug in 1997, but not by choice. The Defender's lack of airbags and door impact beams meant it wouldn't meet American safety standards.