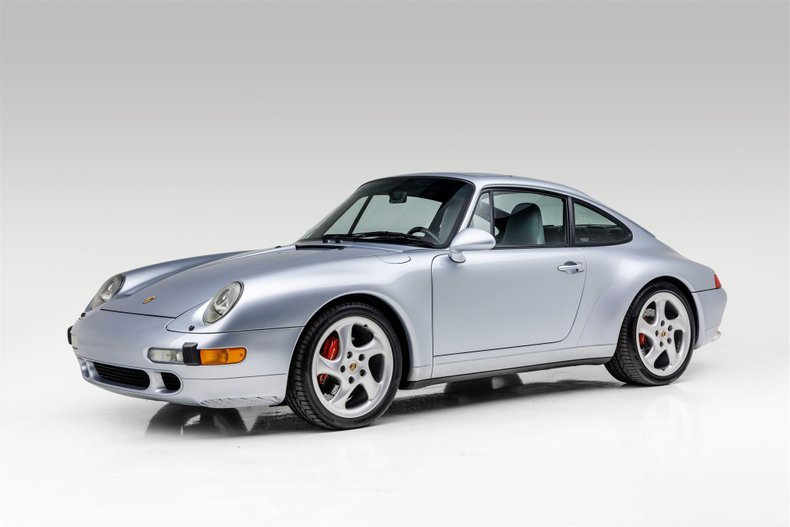 This low-mileage 1996 Porsche 911 Carrera Coupe was completed at the factory on January 4, 1996. The order for this car specified Polar Silver Metallic (A8) paintwork, Grey interior with black accents, 17” wheels w/Cup Design Rims, Rim Caps w/Porsche Crest, Comfort Package, Power Seat Package. It was shipped to the US and was sold by Bill Cook Porsche of Farmington Michigan, to its first owner on January 31, 1997. The second, an avid Porsche collector purchased it in early 2000 with just over 20,000 miles on the odometer. He preferred the look of the narrow body but wanted some of the features that could be found on the 993 Turbo, so he purchased a factory front bumper (a big improvement of standard), 18” Turbo Twist Wheels with correct offset for a narrow body 911, put “Big Red” brakes on all four corners and installed a stainless steel Fabspeed Exhaust. He was very satisfied with the improvements and went on to keep the car for nineteen years until he sold it to European Collectibles with 33,497 miles on the odometer. Upon arrival in California, we sent the car out for a major engine-out service that included all new engine gaskets, refurbishing the AC system, replacing all fluids and belts, installing new tires, and making some minor cosmetic tweaks. All-in, we spent over $5,000 in early 2019. The car was quickly sold to another Porsche collector who used it during summers in Oregon and winters in Arizona. Regular services were carried out during his three years of ownership and 6,000 miles were added to the odometer. For entertainment during his longer trips, he had a Porsche Classic Communication Management System that provided him with Navigation, Bluetooth, Streaming and all the latest technology. Upon return to European Collectibles for sale (February 2022), the car was serviced again and is ready for another enthusiast owner who wants a great driving 993.