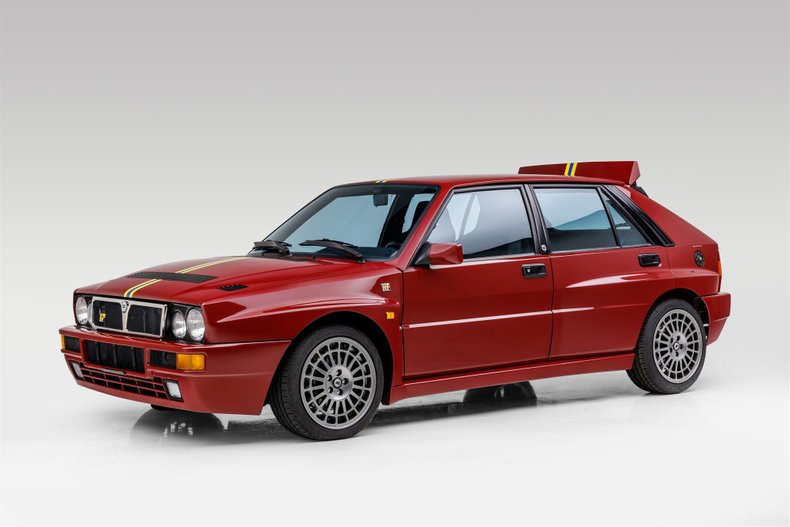 Rare and highly coveted final edition of the road-going version of one of the most successful rally cars in history. Finished in Bordeaux Red over Dark Grey upholstery. The paintwork is original, in remarkable condition, and accented by a blue and yellow striping down the center of the car. Equipped with distinctive “Final Edition” exterior details including hood vents, a high-mounted adjustable rear spoiler, a rear wiper, boxed fender flares, and fog lights. The interior is in excellent shape and features bolstered Recaro Sport Seats, OMP competition pedals, and air conditioning. The dash is in impeccable shape with a leather-wrapped Momo Corse steering wheel, factory Veglia instrumentation, and a Continental radio. Gunmetal gray 16” Speedline wheels are fitted with Pirelli P Zero Nero GT 205 45 ZR16 tires.

This Delta Integrale was originally a Japanese market vehicle and was sold by a Lancia dealership in Urawa City, Japan. The first owner took delivery of the Lancia in 1994 and drove it sparingly until April 20, 2020. While in Japan, the Lancia was subjected to yearly Japanese vehicle inspection checks. The records on hand show a chronological progression of mileage from 1,500 km to 19,669 km where information on the extent of each service is known. On August 7, 2020, the vehicle was sold and left the port of Yokohama and entered through the port of Long Beach, California. The second owner has the car currently registered and titled in Montana.

Mechanically powered by a turbocharged and inter-cooled 2.0-liter inline-four that is capable of outputting 250 horsepower paired to a 5-speed manual transmission. Fully documented including complete service history, two keys, #200 of 250 HF badge, Lancia owner's manual, and a warranty booklet. A unique opportunity to acquire a Delta Integrale in remarkable condition that is offered with complete service history and offers a thrilling driving experience.

History
The Lancia Delta HF Integrale Evoluzione II Edizione Finale is the culmination of one of the most successful rally cars in history. In racing form, the Delta won an unprecedented six consecutive World Rally Championships, from 1987 to 1992. Little separates production versions of the Lancia Delta HF from their racing counterparts. To remain competitive, the Delta HF benefited from numerous incremental upgrades over its lifespan.

The so-called “Edizione Finale,” or final edition of the Delta HF Integrale Evoluzione II, is said to have emerged because of requests from a vocal contingent of Japanese enthusiasts. Limited to 250 units, the Edizione Finale is distinguished from other Delta HF Integrale models by its livery of Bordeaux Red with yellow and blue stripes. Attributes unique to the final edition include front and rear Eibach springs, an OMP strut brace, and upgraded engine management that increased output from the turbocharged four-cylinder engine to a claimed 250 horsepower. Other features include 16-inch Speedline wheels finished in Anthracite, push-button start, carbon-fiber trim details, aluminum OMP pedals and passenger footrest, Recaro seats, a Momo steering wheel, and an “Edizione Finale” identification plate next to the gear lever.