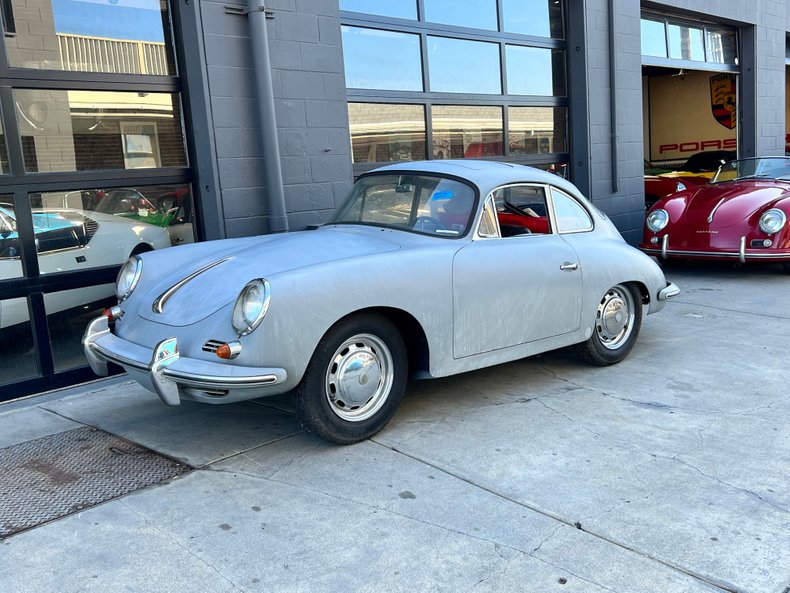 Completed July 14, 1964, the first owner was Hane-Dieter Bolle from Berlin, Germany. The next documented owner was Jimmie Fields from Spokane, Washington (1983-1999), and the 356 was used as a daily driver. In 1999, the 356 was sold to the past owner who lived in Portland, Oregon and decided to restore the 356 SC. The entire car was disassembled, all the metalwork was performed to very high standards and all the parts were documented. However, after two decades, the restoration was never completed.

The body is very straight with good gaps and panel fit, and all the metalwork has been done properly. There are photos of the body in steel before primer. The floor pans, longitudinals, jack spurs, and battery box have been replaced with correct sheet metal and all is solid and rust-free. The undercarriage has been undercoated in German Wurth undershoot and there are photos of the undercarriage in steel as well.

According to the Kardex, this was delivered as a factory 356 SC Sunroof Coupe originally finished in a very desirable Irish Green (color code 6406) with a Black interior. This 356 was special ordered with a factory electric sunroof. Additional options include date-coded chrome wheels, antenna, radial fresh air blower, Blaupunkt Frankfurt AM/FM Radio, 2 loudspeakers, owner manual, and Kardex.

Mechanically, the original matching 1600cc 356SC engine (type 616/16) produces 95 horsepower and has been run on an engine stand with good compression. The engine is paired with a 4-speed manual 741 transmission and four-wheel disc brakes (standard for all 356 C and SC models). An excellent opportunity to acquire a solid rust-free 356SC electric sunroof coupe in a very desirable original color combination.

History
The revised version of the 356 at the end of production was the 356SC, truly one of the BEST 356s to drive. The 356SC holds a special place in Porsche history, not only as a sales success but also as an icon of one of the BEST 356s to drive, a classic automotive design. Motoring enthusiasts new to the classic car world are well served to acquire a “blue chip” Porsche such as this.

The 356 was a lightweight and nimble-handling rear-engine rear-wheel-drive 2-door sports car available in hardtop coupé and open configurations. Engineering innovations continued during the years of manufacture, contributing to its motorsports success and popularity. However, when the T6 got disc brakes in 1964, with no other visible alterations, they called it the model C, or the SC, when it had the optional extra powerful engine. The last revision of the 356 was the 356C introduced for the 1964 model year. It features four-wheel disc brakes, as well as an option for the most powerful pushrod engine Porsche, has ever produced, the 95-horsepower "SC".