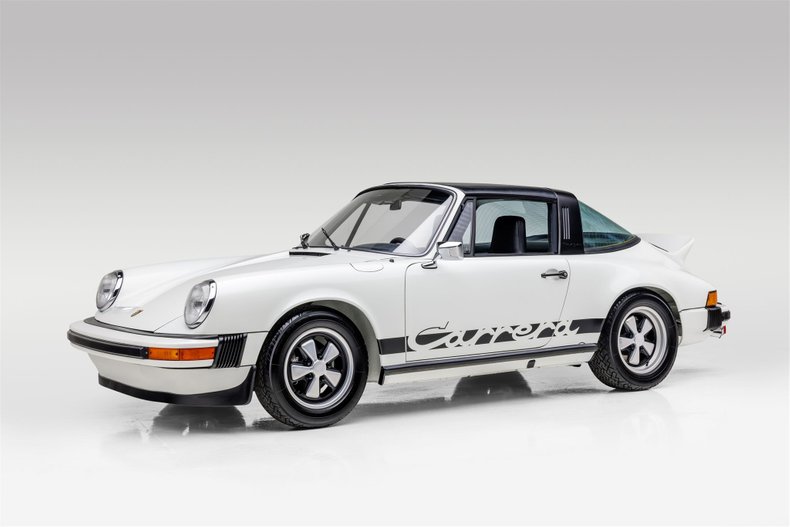 Same owner for the past 36 years finished in its original color combination of Grand Prix White (R4) with Black (16) leatherette upholstery. The black Carrera script is an amazing contrast against the Grand Prix White paint. The interior is in great condition and features factory VDO instrumentation, Blaupunkt Cassette Radio, and a 3-spoke leather-wrapped Porsche steering wheel. According to the Certificate of Authenticity this European Carrera MFI was originally delivered to Belgium and came with Koni shock absorber, “S” brakes, fog lights, white - under the bumper, Targa – folding top, manual antenna, front loudspeaker, noise suppression, and rear spoiler.

The earliest known history of this vehicle begins with a Colorado registration on August 15, 1985. According to the past owner, nearly 15 years later in 2000, he had the vehicle completely disassembled, brought down to the bare metal, and repainted in the original color Grand Prix White by a professional facility in Colorado. In the early 2000s, the owner moved to Washington state for work and brought his Carrera with him where it was primarily serviced by Chris's German Auto in Redmond, Washington.

When the vehicle arrived at European Collectibles the engine and transmission were removed, and EC performed a complete undercarriage detail which was fully documented. The complete suspension and braking system were removed down to the tub. All the components have been rebuilt, re-bushed, CAD plated, powder-coated, and painted. The transmission was also rebuilt with all new synchromesh and bearings, the case was tumbled, and all the necessary hardware components were CAD plated. The Fuchs alloy wheels were restored and fitted with new Pirelli Cinturato CN36 185 70 VR15 front, and 215 60 VR16 rear tires.

Subsequently, the engine was completely rebuilt due to a broken head stud. The engine was completely disassembled, the cylinder head and head studs were removed, along with the pistons and cylinders, connecting rods, and the engine case came apart. The engine case was sent out to be checked and line-bored, and it is standard/standard. Engine case savers and an oil bypass modification kit were installed along with a new GT1 series oil pump to increase oil pressure. The connecting rods and crankshaft were sent out to be balanced and the rods were re-bushed. After the crankshaft was balanced it was polished, and the plugs were removed and cleaned. The MFI pump was also sent out to be reconditioned. A complete valve job was done and new intake and exhaust valves were installed in the cylinder heads. The oil cooler and injectors were cleaned with an ultra-sonic machine. GT1 series chain tensioners were installed with a new timing chain. All the hardware was media blasted, tumbled, and polished. Gold zinc plating was done on the necessary hardware. The fan was restored, Zinc plated, ceramic coated, and balanced. The connecting rods and crank were checked again, installed, and torqued. New main bearings were measured and checked, new head studs, internal gears, and the crankshaft were installed and the backlash was checked. The two-engine halves were then mated together, the through bolts were installed and the 8 mm nuts were torqued. The pistons and barrels were cleaned and checked, new cylinder rings were installed on barrels, and the connecting rods were attached to the case. The rebuilt cylinder heads were installed to the barrels, the chain housing and chain sprockets were installed and the cam timing was set. The rockers, change box covers, spark plugs, heater boxes, exhaust, hoses, flywheel, pressure plate, and clutch disk were all installed. The complete rebuild of the engine has been documented with photos and receipts.

The US Carrera 2.7 was restricted to the 2.7 K-Jetronic engine as the MFI RS engine was banned on emission grounds. Power output was 175 bhp, though it was later reduced to 165 bhp for the U.S. market as a whole, and to 160 bhp in California.