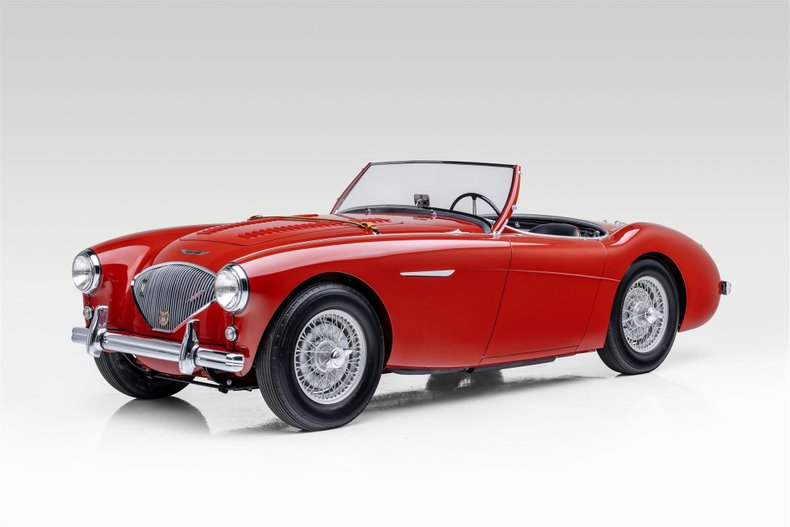 On April 15, 1955, British Motor Car Distributors, Ltd., delivered the 100M to the first owner, PFC William Horner, at a total suggested retail price of $3,190. Private Horner's ownership spanned 36 years (until 1991) and he sold the 100M to the second owner, Mr. Brockman. Under Brockmans' ownership, British Motor Industry - Heritage Trust Certificate (#91/2768) was issued on April 15, 1991. Austin Healey 100M “Le Mans” Registry Certificate was issued in May of 1955. Following the certificates, a professional body-off frame concours restoration was performed and is documented with excellent photographs circa 1999. The project is well-documented, as the car was carefully disassembled, media blasted, and placed in a rotisserie before being rebuilt from the ground up. The restoration encompassed both mechanical and cosmetic aspects of the car. On August 9, 1999, Mr. Brockman entered the 100M in West Coast Austin Healey Concours d' Elegance in Mission Valley, California, and scored 978.5 out of 1,000 points and received a First in Class award. On August 9, 1999, the Austin- Healey Concours Registry inspected the vehicle and the vehicle achieved a Gold level certification. In September of 1999, ownership was transferred over to the third owner, Mr. Anderson who enjoyed the vehicle for five years. In 2004, the fourth and current owner purchased the vehicle and serviced the vehicle as needed with trusted and reputable Healey repair shops. Between 2006 - 2007, Fourintune Garage Inc. performed the following overhaul gearbox and replaced the overdrive. This highly desirable Factory 100M Le Mans benefits from meticulous care, and it continues to impress, even two decades after its restoration.

Specification
The 100M had many sporting improvements over the standard 100/4, making it a superior car. The standard BN2 engine was up from 90bhp to 110bhp; these cars had larger performance, 1 ¾” SU H6 Carburetors, a special inlet manifold, cold air box and air tube, high compression pistons, high lift camshaft, a special distributor, and a louvered hood with Le Mans regulation leather strap. In addition, the front windscreen would fold down flat.

History
Donald Healey had success racing two modified 1000/4 BN Roadsters at the Mille Miglia and 24 Hours of Le Mans. This inspired him to build a limited production, factory-built, high-performance version of a similar specification or a client. There were only 640 built and they were called the 100M or Le Mans model. The new Healey featured the four-speed overdrive transmission and the numerous smaller improvements implemented during production since the introduction of the BN1 in 1953. The left-hand-drive Austin-Healey was equipped with a heater, miles per hour speedometer, Duplo double vertical dip headlamps, and a laminated windscreen. Under the Le Mans-style louvered and leather-strapped hood are a familiar polished aluminum engine headcover, big twin SU carburetor, and further upgrades that are denoted by the plaque declaring this example to be upgraded to 100M Le Mans spec. Installation of the Le Mans Modification Kit is understood to have been carried out by the original dealer.