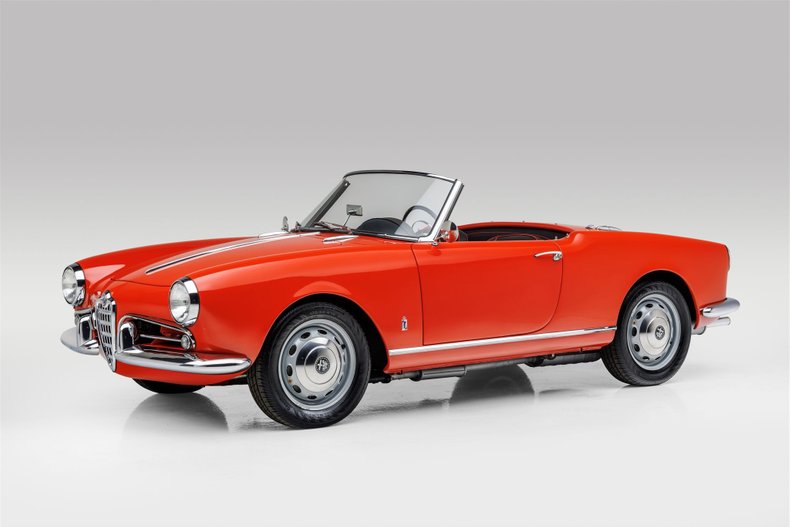 The earliest known history begins in January of 1992 when this Alfa was comprehensively restored over a 10-month period by Ashcraft Restorations on behalf of Mr. Weatherford. The results of the restoration led Mr. Weatherford to win at the Palm Spring Concours d' Elegance on November 22, 1992. In 1994, the Spyder was purchased by Mr. Birkheimer and through the efforts of Conrad Stevenson and Phil Reilly & Company Auto Restoration, the Spyder was fine-tuned and sorted over the next decade.

On October 5, 2006, the vehicle was purchased by its previous longtime owner of over 16 years where the Alfa lived in Northern California. As an avid collector who likes to keep his cars fresh, he spent the next decade improving various components of the vehicle to further enhance the aesthetic and mechanical qualities of his Alfa. On November 13, 2006, at 60,996 miles, The Pit Stop Automotive was commissioned to perform the following; rebuild the transmission, replace the rear main seal, replace the clutch, replace the exhaust mounts, rebuild the generator, rebuild the brake master cylinder and bleed and adjust the brakes: this totaled $8,803.87. Over the following years, the same facility restored the convertible top frame, installed a new canvas top and straps, restored the gauges, and refurbished all four wheels.

Mechanically powered by a performance engine that runs phenomenally paired to a manual 4-speed transmission and four-wheel drum braking system. The original engine is also included in the sale. Complete with Giulietta instruction manual, tonneau cover, and 31 years of service history. Eligible for many classic car rallies, this Spyder is the final iteration of the early, first-series, Spyders' and remains one of the most iconic sports cars ever produced. This fine example deserves serious consideration and would be a great addition to any collector's stable.

History
By the 1950s, Alfa Romeo had an enviable reputation as a manufacturer of incredibly successful racing cars and stunning road cars. This reputation was developed over successive decades and resulted in wins in the most iconic road races, including the Mille Miglia and Targa Florio. Alfa Romeo could also boast that the world's best drivers, including Tazio Nuvolari, Giuseppe “Nino” Farina, and Juan Manuel Fangio, had won races in its cars.

It was with this backdrop that Alfa Romeo set the standard for meeting the high expectations of its customers. With each of its models very well received, the real stand-outs throughout its history were its glamorous convertibles, including the 6C 250 SS Spider.

In 1954, Alfa Romeo introduced the 1.3-liter Giulietta, establishing its reputation for producing small cars with “big performance”, and this reputation has continued to this day with the recently launched 4C. Such was the success of the Giulietta, whose introduction caused a sensation, that Alfa was forced to change its whole ethos and become, for the first time, a high-volume manufacturer.

Berlina and spider versions quickly joined the original Giulietta Sprint Coupé of 1954, and the spider benefitted from simple and elegant coachwork designed and built by Pinin Farina. In 750 series form, the Veloce Spider came with an up-rated engine that was equipped with dual Weber carburetors and could produce a healthy 90 brake horsepower, which was 10 horsepower higher than the standard engine. The Giulietta Veloce enjoys the honor of being the best performing and most developed open variant of the 1300 line.