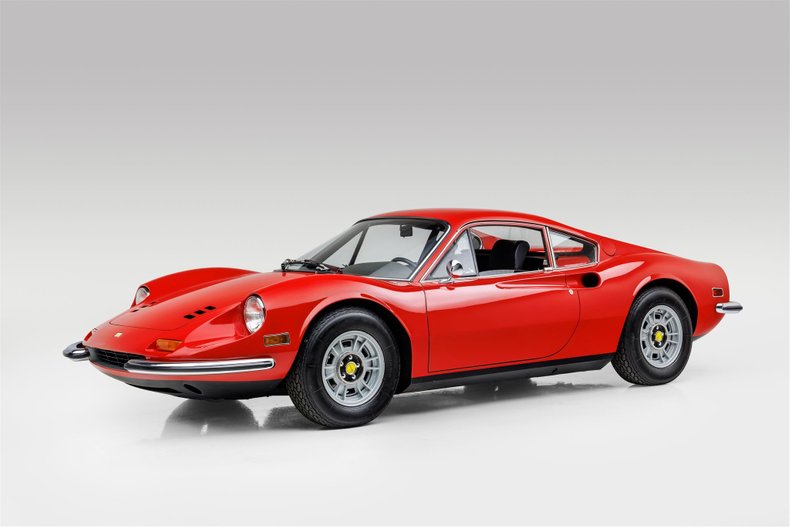 According to the documentation and the Massini report, this Dino was reportedly delivered new in April of 1973 to William Harrah's Western States Ferrari distributorship in Reno, Nevada. The first owner was Timothy Nicholas a resident in Glendale Arizona from 1974 to 1979. The second owner was Charles Borin from Northridge, California from 1979 to 1982. On April 12, 1982, Motor Classics Inc in LaGrange, Illinois sold VIN 04914 to Mr. Palumbo in Wheaton, Illinois with 8,327 miles. Four years later, Mr. Palumbo was in correspondence with an interested buyer, and on November 14, 1986, Mr. Young followed through and purchased the Dino and had the vehicle relocated to his home in Sedona, Arizona. Mr. Young and his wife were avid lovers of the Dino and took excellent care of the vehicle for over 26 years, servicing it as needed and adding very few miles. In 2012, the vehicle was listed by Wayne Carini's F-40 Motorsports in Portland, Connecticut where it was sold to Mr. Lerardi. On January 26, 2013, the Dino was displayed at the XXII Palm Beach Cavallino Classic held at The Breakers Hotel in Palm Beach, Florida, and was the winner of the Palm Harbor Marina Award and the Platinum Award.

History
Introduced in 1969 as a successor to the earlier 206 GT, the Dino 246 GT furthered Ferrari's ambition to nurture a “junior” range of cars that were less powerful than many of their Maranello stablemates, but more affordable as a result. Building on the debut Dino's established formula as a lightweight car with a mid-engine chassis cradling a transverse-mounted V-6, the 246 GT was made with a slightly extended wheelbase; engine displacement was increased to 2.4L. The recognizable shape of the body was designed by Pininfarina, and the Scaglietti-crafted coachwork of the 246 GT was made from steel rather than aluminum. Between 1969 to 1974, more than 3,700 examples were manufactured of both the 246 GT and the GTS, the Targa-style open-top sister model.