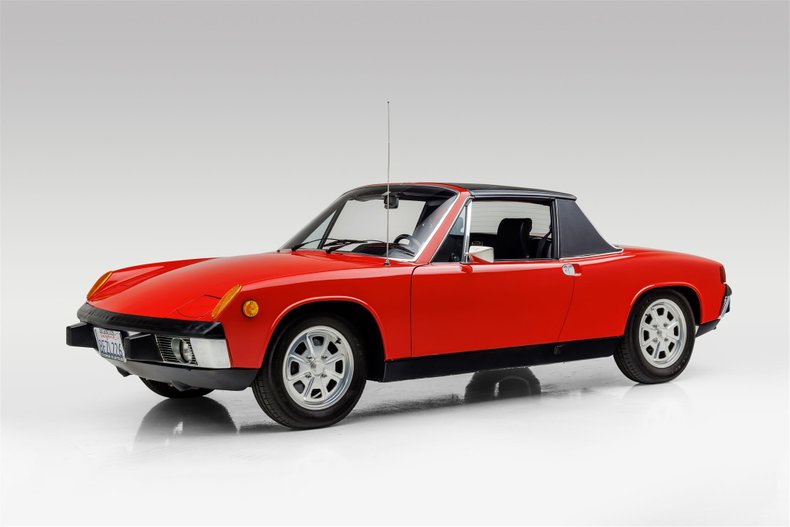 Mechanically powered by a 1.8-liter flat-four engine paired to a 5-speed manual transmission and four-wheel disc braking system. Complete with jack, spare, and recent service history. An excellent opportunity to acquire a 914 that is in excellent shape cosmetically and mechanically.

History
By the late 1960s, inflation and currency issues had forced Porsche so far upmarket (above the magic $10,000 mark for a highly optioned 911S) that they became desperate for a new four-cylinder entry-level car. The 912 was ripe for replacement, as it could no longer be produced cheaply enough to qualify as entry-level, and the new Datsun 240Z had made a mockery of it on a performance level. The answer was a collaboration with Volkswagen who would sell the new car, dubbed the 914, as a VW-Porsche in Europe. In the U.S. it was known as a Porsche but never carried the Porsche crest on the hood.

Styling was considered odd in the day and still is, but it avoided most of the impracticalities of the mid-engined layout with good outward vision and two large trunks. Performance was modest at first with base VW-derived engines of 1.7 and 1.8 liters. The 2.0-liter cars gave a more sparkling performance and are the most desirable of the four-cylinder models today, and they are cheap to rebuild to boot. Handling is superb with fine brakes and phenomenal steering. Bright period colors suit the car well.

The 914-6 was produced between 1970-72 and utilized a carbureted version of Porsche's six-cylinder engine. The suspension was upgraded to better accommodate the increased output of 110 hp. Porsche also produced 32 factory-built, race-prepped versions of the 914-6 GT. Another 455 914-6s were either ordered with the “Competition Option Group” GT package or were upfitted with a factory kit.