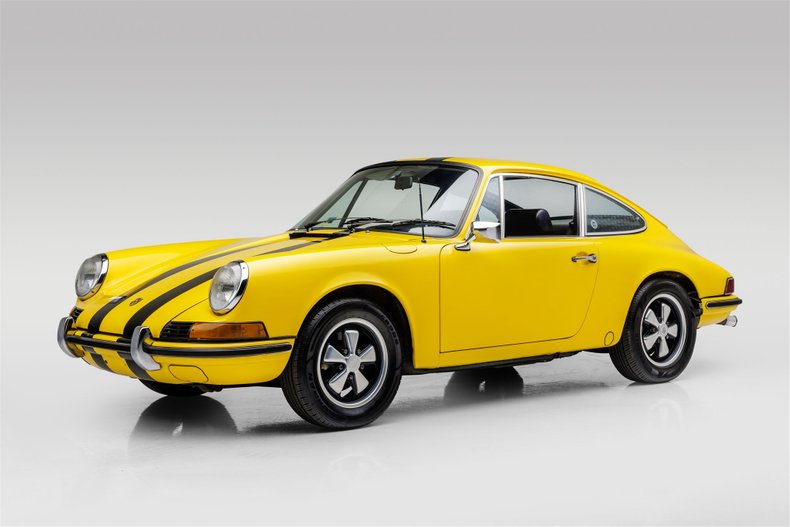 Originally delivered from the factory in Sepia Brown (54) with a Beige leatherette upholstery. Options include US Equipment, Forged Alloy Wheels, Chrome Fender Molding, Comfort Equipment, Manual Antenna, and Tinted Glass All Around. The exterior is currently finished in Fly Yellow with Black stripes with black badging, and a rear black decklid grill. The upholstery is in excellent condition and features a leather-wrapped Momo steering wheel, VDO instrumentation, and new charcoal carpets. Restored Fuch 6” x 15” alloy wheels are fitted to Ironman tires. The undercarriage is very straight with no signs of any rust.

History
Beginning in January 1973 Bosch K-Jetronic CIS (Continuous Fuel Injection) system from Bosch was used on the Type 911/91 engine, which replaced mechanical fuel injection (MFI) in the 1972-1973 911T model. The CIS was only produced for the last six months of the model year before the new 1974 model 911s came out with the big impact bumpers August 1973. The CIS 2.4-liter engine produces 140 horsepower @ 5,700 rpm with a 915 traditional 5-speed transmission and four-wheel disc brakes. Only 1,944 K-Jetronic (CIS) fuel injection were built. Truly an amazing 911 to drive!