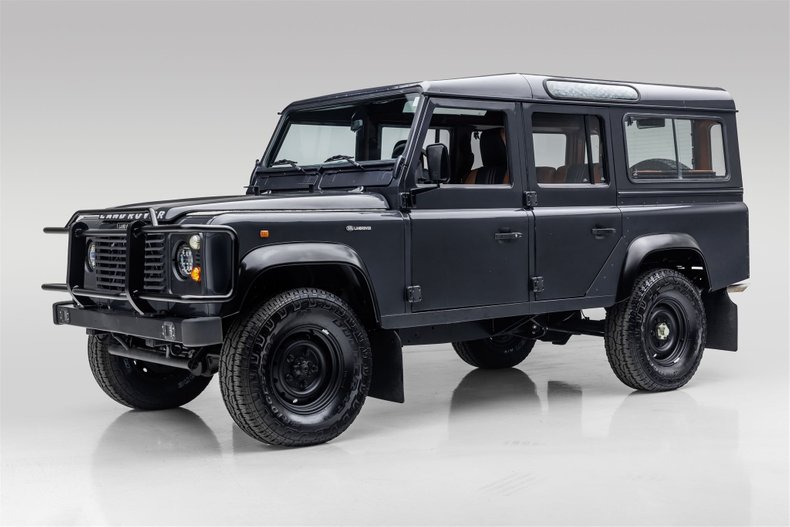 This Euro Spec. Defender 110 was assembled in Solihull, United Kingdom. Finished in Niagara Black (LVD 574) with fender flares and two-tone leatherette upholstery. The front of the vehicle has a steel front bumper with LED pendant driving lamps, LED headlights, and a reinforced brush bar. The exterior is further enhanced by original Sicursiv tempered glass, checker-plate fender protection, and a rear step bumper with a class 3 receiver. The interior is trimmed in Charcoal and Armagnac leatherette with matching door panels and a black headliner.

Features include air conditioning, a lockable center console, Land Rover rubber floor mats, and toggle switches for the auxiliary LED exterior lighting. Instrumentation includes a 150-km/h speedometer and additional gauges displaying fuel level, water temperature, and time. Black steel wheels are mounted with Bridgestone Dueler tires. Power comes from a 2.5-liter 300 Tdi turbodiesel inline-four-cylinder which drives all four wheels through a rebuilt manual five-speed (R380) gearbox and a two-speed transfer case. According to the past owner, reported work included rebuilding the rear axle with new bearings, a shaft, and reinforced flanges. Other maintenance consisted of installing a clutch, timing belt, and rear main seal. An excellent opportunity to acquire a turnkey Defender 110 with a powerful 300 Tdi in great overall condition.

History
Descended from the old slab-sided, utilitarian Land Rovers of the distant past (last sold in the U.S. in 1974), the Defender 110 appeared as a limited edition for 1993. The 4-door wagon was designed primarily for off-road use and powered by a 3.9-liter V8 engine that made 182 horsepower. Only 500 were built for 1993, the model's sole season on the market.

With a 110-inch wheelbase, the Defender 110 was 10 inches longer between the axles than a standard Range Rover and 2 inches more than the new long-wheelbase version of the Range Rover. Overall length ranked between the two Range Rover models. Defender's V8 engine was similar to the one used in the Range Rover County. Only a 5-speed manual transmission was offered. The permanently engaged 4-wheel drive was standard.