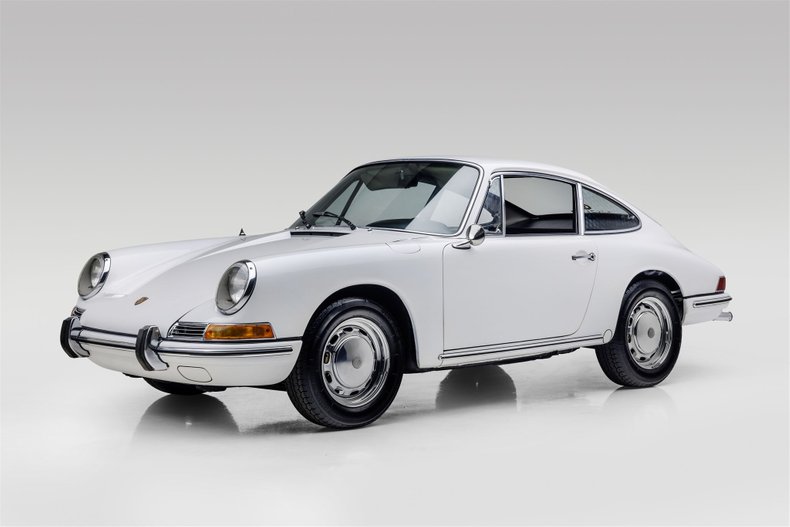 This very early painted-dash 912 has been a Southern California car for the past 55 years, and was originally finished in Light Ivory (6404) over Black leatherette upholstery. VIN 350421 is the 421st Reutter 912 Coupe built out of just 700 produced in 1965. The paintwork is very presentable with original glass and exterior trim. The upholstery is well preserved with black leatherette seats, grey carpets, and CoCo mats. The painted dash features early VDO green instruments and an AM/FM Blaupunkt blue dot radio. Date coded Lemmerz chrome wheels are fitted to Sprint Classic Vredestein 185/70 R15 tires.

In accordance with the documentation on hand, a copy of the original title confirms that this 912 was owned by Mr. Mircheff in 1969 who resided in Culver City, California. Verified by services and registrations, Mr. Mircheff owned this 912 for the following 50 years servicing it as needed until he sold the 912 in 2020. On March 14, 2020, Lomita 911 Service Inc was commissioned to replace clutch, pulley seal, repair the horn, wipers, and replace engine mounts. A recent tune was done by European Collectibles.

Mechanically powered by the matching 1600cc flat-four engine producing 100HP paired with a 5-speed manual 901 transmission and four-wheel disc brakes. Early painted dash 912s such as this are becoming increasingly difficult to find and this is a dry rust-free example.

History
It is impossible to pinpoint when the 1965 912 model year ended and when the 1966 912 model year began. In 1965 operations at Porsche were such that any given supply of parts would be used until exhausted, and then replacements would sometimes be updated, but such changes did not strictly occur in accordance with each changing model year. Complicating matters further is that bodies for 912s were made both at the Porsche factory, and by subcontractor Karmann, thus allowing for a scenario where later cars with earlier features could be built at one facility, while earlier cars with later features could be built at the other. Confusing matters even further, since 1965 912s were only sold in Europe, most of the first 912s to arrive in the U.S. came via Porsche's European delivery program, whereby U.S. citizens could take delivery of new 912 at the Porsche factory, drive it through Europe for a few weeks, and then import it to the U.S. as a used car at a tremendous tax savings compared to a new car.