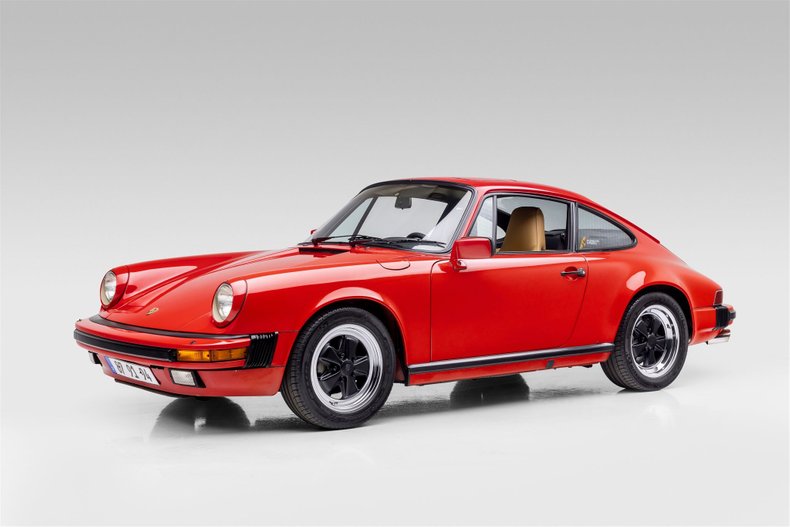 Southern California car for the past 31 years and was originally finished in Guards Red (L027) over a Tan leatherette interior which is verified through the factory Porsche sticker underneath the hood. Factory equipment included California emissions equipment (C03).

The paintwork is mostly original and is in very good condition with excellent gaps and panel fit. The exterior is equipped with body-colored headlight rings, fog lights, original glass, and exterior trim. The interior is equipped with a leather-wrapped 4-spoke Porsche steering wheel, air conditioning, electric sunroof, Alpine AM/FM CD radio, and factory VDO instrumentation. The Fuch alloy wheels are fitted to Michelin Pilot Sport Exalto tires 205 55 ZR 16 fronts and 225 50 ZR 16 rears. The undercarriage is in original condition with no signs of rust.

On October 27, 2014, at 87,587 miles, Daniel's Speed Shop in Costa Mesa, California performed the following remove the clutch assembly, replace the flywheel, seal, pilot bearing, clutch disc, pressure plate, and clutch release bearing. At the same time, a full top-end engine rebuild was done and new sound-deadening insulation was installed in the engine compartment. The 915 transmission was also fully rebuilt with new synchros, gaskets, and seals. The sunroof received new seals and weather stripping. Lastly, the braking system was rebuilt with new pads, rotors, and sensors. Over $16,000 was spent.

History (1984-1989)
With the 911's future assured, 1983 saw the launch of a replacement for the successful SC series. It was the MY 1984 911 3.2 Carrera, reviving the Carrera name for the first time since 1977. The 911 3.2 Carrera was the last iteration in the original 911 series, with all subsequent models featuring new body styling with new brake, electronic and suspension technologies.

A new, higher-displacement motor, a 3.2-liter horizontally opposed flat 6 cylinder, was utilized. At the time, Porsche claimed it was 80% new. The new swept volume of 3,164 cc was achieved using the 95 mm (3.7 in) bore (from the previous SC model) combined with the 1978 Turbo 3.3 crankshaft's 74.4 mm (2.9 in) stroke. In addition, higher domed pistons increased the compression ratio from 9.8 to 10.3:1 (although only 9.5:1 for the US market). New inlet manifold and exhaust systems were fitted. The 915 transmission was carried over from the SC series for the first three model years.