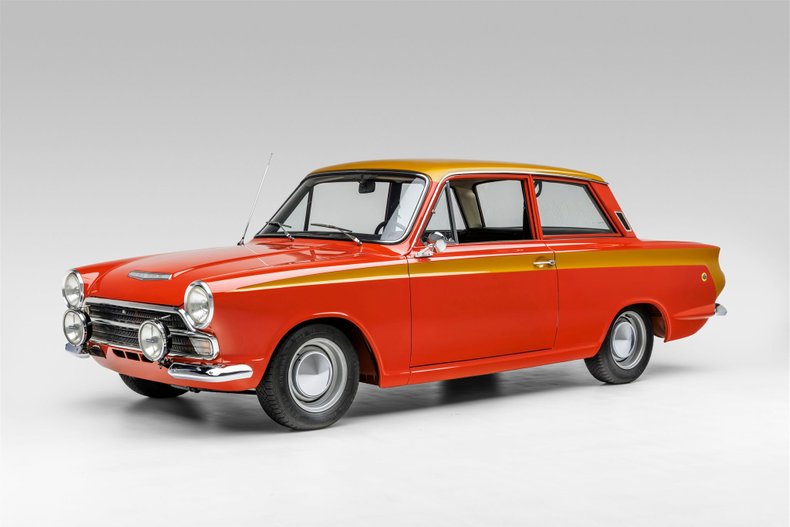 One of 200 left-hand drives delivered to the United States, Type 28 Cortina is finished in a very rare exterior color combination of Red with Gold with Black leatherette upholstery. The exterior paintwork presents very well with excellent gaps, original brightwork, original glass, Marchal headlight, and Carello driving lights. The black vinyl upholstery is in excellent condition with matching door panels and polished aluminum trim. A 3-spoke leather-wrapped Lotus steering wheel sits ahead of factory Smiths 140 mph odometer and an 8000 rpm tachometer with a 6500rpm redline. Additional Smiths instrumentation are positioned above the radio with a fuel level, amperage, water temperature, and oil pressure gauge along with two, Galco by Racine, Swiss stopwatches. Factory-painted wheels are fitted to Kelly Metric Radial steel-belted 175/70 R15 tires. Also included in the sale are four (4) Panasport wheels Z-Light 1570 20mm fitted to Kumho Ecsta AST 205/50 R15 tires. The undercarriage is in exceptional condition with no signs of rust.

While its early history is not documented, it may have been delivered to the West Coast when new, as it was discovered in Northern California by its previous owner in 2006. Upon discovery, the decision was made to restore the Cortina in the legendary red and gold livery of Alan Mann racing, one of Ford's most successful factory-backed teams of the 1960s. When stripped for paint, the body was determined to be very solid, with no obvious evidence of accident damage. The original bumpers were re-chromed, while other brightwork was left original. All the weatherstripping was replaced, and rally stop-watches and Carello driving lights were installed for a sporting period appearance. Inside, the seats and headliner were restored to original specification, as were all the instruments, carpeting, and the heater. The door panels and center console remain original as found, with a period AM/FM radio.

Many mechanical aspects of the car have been carefully restored or refurbished. The engine, a proper Lotus L-type block, was rebuilt, standard bore and fitted with forged pistons, and additionally features fuel injection in place of the original carburetors (The original carburetors are included in the sale). The cylinder head has big valves with Sprint cams. The transmission has the correct semi-close-ratio 4-speed and was also rebuilt with all new bearings and seals. The suspension bushings were replaced for a tight driving experience, while the rear axle, braking, and steering systems were refurbished. All the fluids including the engine, transmission, and brakes were replaced in March of 2021.

Mechanically powered by a 1,558cc DOHC inline 4-Cylinder engine with fuel injection capable of outputting approximately 120 bhp at 5,500 rpm paired to a smooth-shifting manual 4-speed transmission. The braking system has front disc brakes with rear drums and a front independent suspension with rear leaf springs. Complete with service records from 2015-2016, an additional set of wheels, and original carburetion. A very rare opportunity to acquire a genuine Lotus Cortina and would make an excellent addition to any collection.

History
The immortal Lotus Cortina by Ford of Dagenham, in England, is one of the most charismatic, best-loved, and universally successful high-performance cars ever to represent the great globalized American company's famous blue-oval badge. The two-door Ford Cortina GT had already been proven in rallies and circuit racing when Ford executive Walter Hayes approached Colin Chapman to produce a world-beating racing saloon, following up a series of successful Ford-powered Lotus Formula Junior single-seaters. The plan called for Lotus to assemble 1000 cars to homologate the model for FIA Group 2 racing. Engineer Harry Mundy – who had previously helped design the Formula 1 World Championship-winning Coventry Climax engines – had been commissioned by Chapman to design a twin-overhead camshaft cylinder head to top the Ford 1500 Kent engine's "unburstable bottom end".