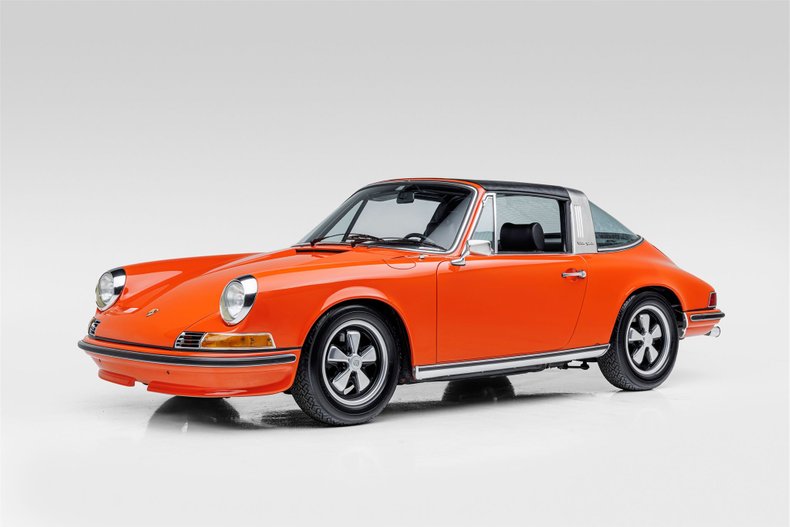 An amazing example of a 911T one-year-only external oil fill on the passenger side rear fender, the first year of the 2.4-liter engine with Mechanical Fuel Injection, and the improved 5-speed type 915 transmission. Finished in its original color combination of Tangerine (23) over Black leatherette interior. According to the Certificate of Authenticity, it was equipment with Comfort Equipment, Blaupunkt Frankfurt AM/FM radio, Stabilizers - Front and Rear, Light Metal Wheels 6” x 15” with 185 70 15 tires, Tinted Glass All Around, A/C and U.S. Equipment.

A recent cosmetic restoration was done, and the paintwork is in remarkable condition with perfect gaps and panel fit. The aluminum trim, brightwork, factory glass, and rubber seals are all like new. The stainless-steel Targa bar is pristine and the Targa top fits perfectly with a new headliner. The 5.5” x 15” Fuch alloy wheels have been refinished and fitted to new Pirelli Cinturato CN36 185 70 VR15 tires date coded 2021. The undercarriage has been incredibly well preserved with no signs of rust.

According to the past owner, the vehicle was originally owned by Mr. Reno, who drove the 911 sparingly until Mr. Brenner purchased the 911T as a graduation present for acquiring his degree in Administration. Mr. Brenner's ownership is recorded through various invoices over three decades from 1988-2017. On June 9, 2011, at 24,002 miles, Classic Import Repair, Inc. was commissioned to remove the engine and do a complete rebuild. After the engine was disassembled and inspected, the crankshaft and camshafts were determined to be in excellent condition. The cylinder heads were sent out to be inspected and new valves were installed. The pistons and cylinders were in excellent condition, the cylinders were honed and new piston rings were installed. The updated Carrera oil-fed chain tensioners were also installed. The timing chains and rails were replaced, and the engine was assembled with new gaskets and seals. The transmission was disassembled, the stack, synchros, and bearing were inspected, and new seals and gaskets were installed. The flywheel was machined and balanced with a new clutch assembly and new shifter bushings were installed. Lastly, the braking, electrical, and suspension components were inspected and serviced. After all the work was completed, Mr. Brenner enjoyed the drive.

On September 18, 2018, the 911T was sold to the 3rd owner, who had a complete cosmetic restoration done over several years. A paint specialist in North Dakota completely disassembled the vehicle, stripped the chassis to bare metal, prepped the body, and painted the 911 in its original factory color of Tangerine. All new components were purchased from Stoddard, Sierra Madre Collection, and Pelican Parts. The upholstery was done by Classic 9 Leather in Dearborn Heights, Michigan including the front and rear seats, door panels, rear panels, a new dash, and German carpets. A year later in October of 2019, the exterior and interior were completed.

For the mechanical work, the 911 was sent to the air-cooled specialists, Auto Edge, in Mahtomedi, Minnesota, and was given a thorough inspection. Over $16,000 was spent on a full engine out service including a valve adjustment, oil and filter service, new distributor cap, rotor, ignition wires, ignition coil, and motor mounts. The engine tin was removed and sent out to be powder coated along with the suspension components. The differential side bearings, main fuel line, and clutch cable were all replaced. The alternator was sent out to be rebuilt, two new batteries were installed, and the ride height was lowered to European spec.

In 1972, a tremendous effort was made to improve the handling of the 911. Due to the 911's unusual engine placement (rear-mounted, with most of the vehicle's weight concentrated over the rear axle), early 911s were prone to oversteer when driven at the limit and could easily spin in the hands of an inexperienced driver. To remedy this, Porsche relocated the oil tank from its position behind the right rear wheel to in front of it. This had the effect of moving the weight of almost 8.5 L (9 US quarts) of oil from outside the wheelbase to inside, improving weight distribution and thus, handling. To facilitate the filling of the oil tank, Porsche installed an oil filler door (much like the fuel filler door on the left front fender) on the right rear quarter panel. Unfortunately, this unique design was scrapped after only one year, some say because inattentive gas station attendants were putting gas in the oil tank. The oil tank was subsequently relocated to its original position for the model year 1973 and remained there until it was relocated within the wheelbase for the 964 models.