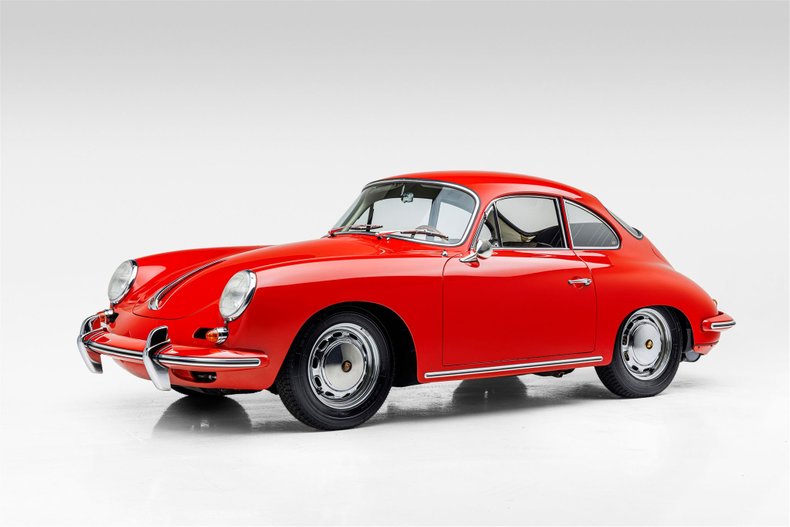 Four (4) owners, California black plate car, finished in Signal Red (6407) with a Black leatherette interior. Originally delivered by Baden Auto in Freiburg, Germany to the first owner Dieter Eber in Baden-Baden, Germany. The Kardex records various services carried out through 1965, including the installation of a factory-replacement 4-cam engine, numbered 97410. The Porsche factory-supported engine replacements were quite common with four-cams. It is important to note that this Carrera 2 retains its factory replacement engine. Ordered with an optional 70-liter fuel tank, along with chrome plated wheels with Dunlop tires.

During the late 1960s, this Carrera was exported to the United States, where it was sold to Thomas Shubin of Downey, California, and was registered to California black plate number ZGD 272. Mr. Shubin won Second in Class with his Carrera 2 at the 3rd Annual Porsche Concours held in Santa Anita Racetrack in March of 1974. The original bill of sale records the transfer of ownership from Thomas Shubin to Bud Owens on October 22, 1975.

Gary Nakase of Huntington Beach, California acquired the Carrera 2 on May 8, 1978, and owned it for over four decades. During his ownership, Mr. Nakase commissioned a comprehensive restoration, which is well documented with invoices, photos, and correspondence in the history file. Beginning in the mid-1980s, ENEX Corporation of Prescott, Arizona, was entrusted to strip the Carrera to bare metal and complete a high-quality cosmetic restoration, including a complete repaint in acrylic lacquer and upholstery work including new carpets, strip and re-varnish the VDM steering wheel, install new chrome bezels on the instruments, reupholster the front seats and replace the headliner. As the cosmetic work was being completed, the well-known Porsche specialists at ANDIAL Road and Race in Santa Ana, California rebuilt the four-cam engine, transmission, suspension, and braking system. By 2003, over $30,000 was spent to finish the assembly and mechanical work.

The paintwork was done to very high standards and is in outstanding condition today with a few imperfections. The decks and doors are original and feature 068 stampings in the factory locations. All the original exterior brightwork, factory glass, and bumpers are in exceptional condition with excellent gaps and panel fit. The upholstery is mostly original with the original VDM Carrera 2 wood steering wheel, deluxe horn ring, and an operational Becker Europa TR radio. The undercarriage is incredibly straight with no signs of rust. The date-coded chrome KPZ 4.5” x 15” wheels are fitted to a new set of Michelin XZX tires date coded 2021.

Mechanically powered by its matching 2.0-liter four-cam engine (type 587/1) that is capable of outputting 130 hp @ 6200 rpm paired to a 4-speed manual transmission (type 741) and the first year of four-wheel disc brakes. Included with the sale is a copy of the Porsche Kardex, spare wheel, Eberspacher gas heater, original key, and an impressive file of documentation dating to the mid-1970s, which documents its long-term California provenance. European Collectibles is very proud to offer this exceptionally rare and well-documented Carrera 2000 GS Coupe.

History of the 356 Carrera
After a considerable absence of a Carrera model in the 356-model lineup, Porsche finally made another 4-cam version with the introduction of a 2.0-liter engine. This Carrera trailed a series of impressive 1.6-liter cars known as the 1600GS. As with the earlier versions, the Carrera was offered both in a Carrera GS Deluxe version for the road and the Carrera GT for the racetrack. Unlike these earlier models, the new car benefited from the 2.0-liter engine introduced as the Carrera 2 in 1962.

The 2.0-Liter Carrera used a variant of the Type 547 4-cam engine with a larger bore and stroke, having 1966cc. The larger cylinder wall meant that the block had to be both taller and wider and the type was changed to 587. The new engine offered much more increased low-end torque making it suitable for everyday driving. The first Type 578 engines were used at the Targa Florio in 1961 where the cars nearly won their class. However, testing on several red coupes to and from race events finalized the specification of the road-going Carrera de Luxe.