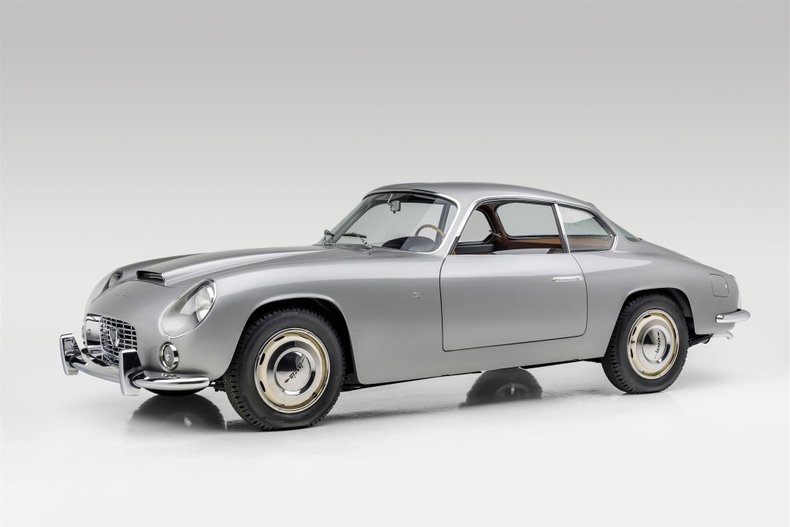 Exceptionally rare and distinguished by the 'double bubble' Zagato roof and distinctive rounded tail, this example is 1 of 99 Sport Zagato Series 1 Coupes produced. Originally delivered by British Motors of San Francisco, California, and used as a daily driver until it stopped running and was stored. The second owner was a policeman who bought it in the 1980s and kept it in his sister's basement for over 20 years. It was then purchased by Mr. Nicosia, a leading Lancia expert, who sold it to the past owner in 2009. Prior to the acquisition, the previous owner verified that this Zagato was complete with all its original components including body, chassis, motor, transaxle, and the original and ultra-rare Series 1 grille.

On November 30, 2009, Automotive Services LTD in Burlingame, California was commissioned to completely disassemble the vehicle, remove the subframe, media blast the inner structure, strip the exterior to bare aluminum, prep the body and repaint in Grigio Newmarket. From 2010-2012 The Pit Stop in Brisbane, California when through all the mechanicals including a rebuild of the engine, transmission, suspension, braking system, fuel system, and installed a new wire harness. The upholstery was supplied and installed by Acker Leatherworks in San Francisco, California. The Pit Stop Automotive completed the final assembly, including preparing the car for any Concours D' Elegance events the owner wanted to participate in.

In 2012 this Lancia was displayed on the lawn at Pebble Beach Concours D' Elegance in the Postwar Sports Class and placed 3rd against a 1958 Pegaso Z-103 Touring Berlinetta and a 1956 Maserati A6G 2000 Zagato Coupe. In preparation for the 2019, Pebble Beach Concours D' Elegance over $18,000 was spent as the Lancia was subjected to a very thorough detail of the exterior paintwork and components, undercarriage, suspension, and engine compartment. Since then, the Lancia has been maintained and serviced by The Pit Stop Automotive.

The Zagato-bodied coachwork features incredibly straight aluminum body panels presented in a beautiful coat of Grigio Newmarket paintwork. The exterior components, trim, and brightwork are all in superb condition with excellent gaps and panel fit. Due to excellent care and light usage, the upholstery is in perfect condition and features rare Zagato sport seats trimmed in brown leather with gray piping, matching door panels, a wood-rimmed Lancia steering wheel, and factory Jaeger instrumentation. Painted steel wheels with Lancia hubcaps are fitted to Pirelli Cinturato HS Radial Tubeless 165 HR400 tires. The undercarriage is in exceptional and in show condition.

History
Post-war, Lancia was well-known for producing some of the most sophisticated, technically advanced, and elegant cars in the world. The Lancia Flaminia began production in 1957 and replaced the Aurelia as the flagship model. It was available throughout its lifetime as a saloon, coupe, and cabriolet with the most sought-after example being the Sport coupe which was a two-seater built on a short wheelbase chassis. Of these Sport examples, the most collectible are the 99, Series 1 cars which were bodied by Zagato, featuring covered headlights and the synonymous 'double-bubble' roof with improved aerodynamics. These Zagato Series 1 cars remain the rarest and most sought-after of all variants that were built before production ended in 1967. The Flaminia Sport Zagato Series 1 cars were powered by Lancia's legendary 2,458cc free-revving and torquey V-6 engine which was mated to a four-speed manual transmission. The engine design was hugely successful, it showed how advanced Lancia's 1950's designs and technology really was.