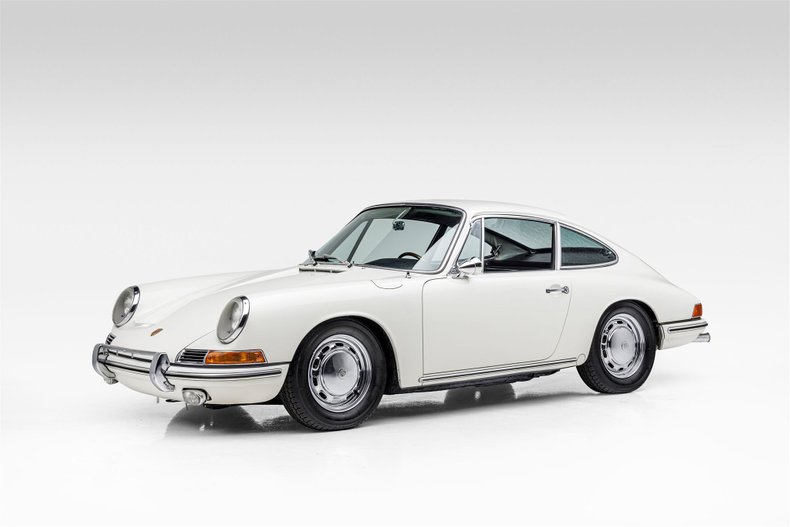 Original paint, preservation class example, finished in its factory color combination of Light Ivory (6604) with the original Black leatherette upholstery. Special equipment from the factory includes a Webasto Gas Heater, Antenna, Loudspeaker, Tinted Glass All Around, Pair of Safety Belts, and Phoenix Tires. It is a matching number drive-line per Porsche Kardex, under single-family ownership for five decades.

The exterior is mostly original paintwork with excellent panel fit and finish. The brightwork, aluminum trim, and glass are all original and in very good condition. The exterior features U.S. Bumpers, Hella Fog Lights, and a Talbot mirror. The upholstery is original and is complemented by a factory wooden steering wheel, wood dashboard trim, matching wood shift knob, Blaupunkt AM/FM/SW Radio, and green script VDO instrumentation. The undercarriage is well preserved with no signs of rust. The Lemmerz chrome wheels are date coded 12/65 fitted with Sprint Classic Vredestein 185 70 HR15 tires (dated 2021).

In accordance with the original service booklet, this 911 was originally purchased new by Cedric Charles Gearing on January 7, 1967, from Vander Horst Motors Inc., in Flint, Michigan. He was born in South Africa and had an engineering degree from the University of Cape Town. He then worked for GM manufacturing as a production engineer for Buick in Flint, Michigan, and eventually had 150 to 200 employees under his leadership. Under Mr. Gearing's ownership, the 911 received services from the selling dealer until 18,029 miles which were recorded on March 4, 1969. On July 20, 1979, Mr. Gearing passed away from a stroke at the age of 83. The 911 was inherited by his son Sydney Gearing and the title was transferred to him on June 13, 1981. Sydney stored the 911, and it was infrequently driven. It was then sold to the current owner in 2021 with approximately 63,000 miles.

The 911 was shipped to Farland Classic Restoration in Denver, Colorado where it was thoroughly addressed from April to October of 2021. The work included a new fuel tank, sending unit, shocks, shifter bushings, tie rod ends, ball joints, sway bar bushings and a set of tires. The engine and transmission were removed, and the engine was partially disassembled for a re-seal. The transmission shaft seal was replaced along with the fuel lines, CD ignition, plug wires, Pertronix ignition, coil, thermostat, chain tensioners, tensioner guards, starter, the right-side heat exchanger, and the oil return tubes. The release bearing and main shaft seal were replaced and the clutch was checked. The chain housing was removed, the cam timing was set and resealed. The fuel pump was rebuilt and the transmission gear oil, engine oil, and oil filter were replaced. This was an engine out with a full service.