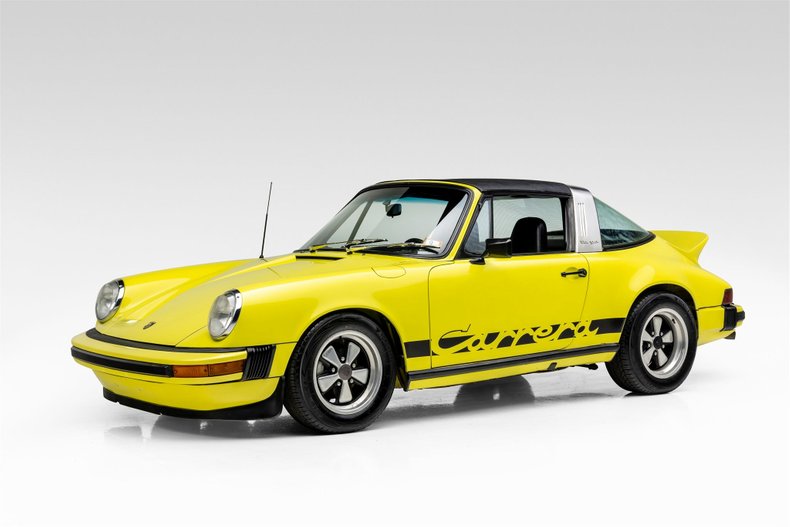 Extremely limited production, high-performance 911, finished in its factory color combination of Light Yellow (117) with Black leatherette upholstery. The paintwork is in good overall condition with some imperfections and excellent gaps and panel fit. The exterior is equipped with black “Carrera” script, stainless steel Targa bar, and a factory ducktail. The interior presents very well with factory seats that have been reupholstered in Black vinyl with a matching dash and door panels. A factory 3-spoke steering wheel sits ahead of VDO instrumentation, Clarion AM/FM/CD radio, and a factory Air Conditioning system. The undercarriage shows no signs of rust and is in original condition.

Powered by a 2.7L SOHC flat-six engine with Bosch K-Jetronic Fuel injection that produces 175hp at 5,800 rpm. Equipped with a 5-speed manual transmission with 4-wheel independent suspension and 4-wheel disc brakes. The U.S. Carrera Targa's are very limited with only 248 produced and they are becoming increasingly difficult to find.

History
The Porsche 911 model lineup was completely new in 1974. Gone were the T, E, and S model designations, and the US market was offered a base (not a fair word) 911, a 911S, and a 911 Carrera. 2.7 liters was the new engine displacement across the model lineup with horsepower ranging from 150 (base) to 175 for the S and Carrera. The freshly designed impact bumpers cleaned up the lines that were compromised by the rubber extensions that were bolted to the front of US cars to meet safety requirements. Although the S and Carrera shared the same powerplant, the Carreras were fitted with flared rear fenders to accommodate a 7” wide rear wheel, a ducktail spoiler identical to the '73 RS, and a graphics package that celebrates the historical significance of the nameplate, Carrera.