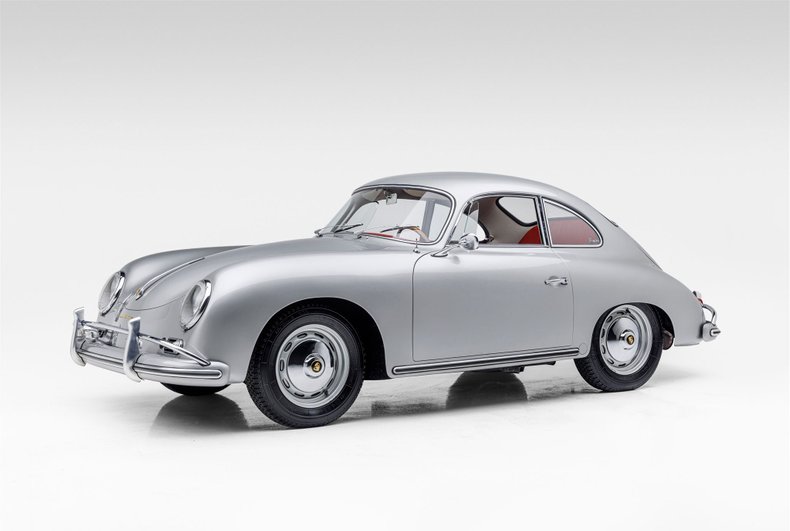 For the past 16 years, single-family ownership finished the original factory color of Silver Metallic (5706). The Certificate of Authenticity states that the interior color was not recorded. Factory equipment includes U.S. Bumpers, 1 Ponto Mirror, Sealed Beam Headlights, Koln Radio, and an Antenna.

The service records indicate that this vehicle was owned by Mr. Evangelista in the late 1990s and was subjected to a six-year comprehensive restoration. Light Horse Engineering completed the metal and paint work in Massapequa, New York. The entire chassis was disassembled, stripped to steel, media blasted, metal finished, sealed, primed, prepped, and repainted in Glasurit Silver Metallic. The panels were pre-fit before paint to ensure the best possible result. The gauges were sent out and restored by Palo Alto Speedometer. A new wire harness, fuse block, and battery cable were ordered from YnZ's Yesterdays Parts. NOS or OEM parts were purchased from Stoddard and NLA Limited. The red leather upholstery with oatmeal carpets was sourced from Auto's International. After the cosmetics were completed, the braking, suspension, and transmission were overhauled and installed. A 912 pushrod engine was sourced and rebuilt by PSH with a big bore 1720cc piston and cylinders. Countless pages of the discussion boards between Mr. Evangelista and the members of the 356 Registry are on file and display the devotion he had towards ensuring the proper restoration of his 356. By 2004, the restoration was completed, and the vehicle was sold to Mr. Lambert who lived in Greenwood Village, Colorado.

After acquiring the 356, Mr. Lambert entered the 356 in the PCA Concours D' Elegance where it received 271 out of 300 points. On May 25, 2005, an appraisal was done by the Paterek Brothers and was regarded as a beautifully restored example that was in show condition. On June 29, 2006, the 356 was sold to the past owner, the vehicle was serviced by Classic Investments, LLC., and Scuderia Rampante. Over $10,000 was spent on July 24, 2017, at 25,049 miles by Scuderia Rampante who performed the following: replaced the tie rod ends, link and kingpins, wheel seals, sway bar bushings, steering stabilizer, and wheel bearings. The brake master cylinder was replaced, and the braking system was bled. The valves and the points were adjusted, and the jets were calibrated to factory spec.