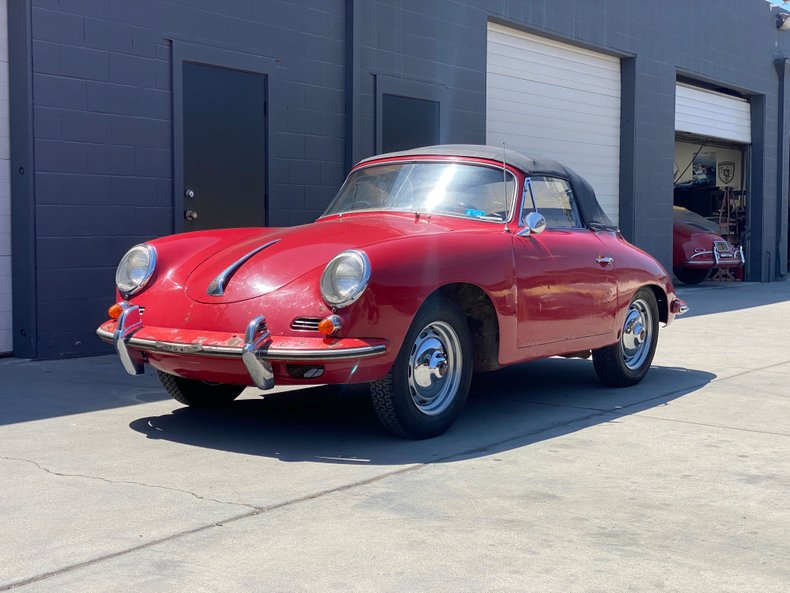 According to factory records, this 356B Cabriolet was imported by Hoffman Motor Cars and was delivered to the first owner, Mr. Frederic F. Lovejoy from Maplewood, New Jersey. Very desirable restoration candidate with matching numbers factory “Super” engine and was originally delivered in a very rare color combination (Fjord Green with a Fawn leather upholstery).

This 356B Cabriolet needs a full cosmetic and mechanical restoration.The exterior is complete with all decks, doors, bumpers, original glass, and brightwork. The front bonnet and rear decklid are numbered “09” and are original to the car. The interior is complete with front seats, rear seats, a VDM steering wheel, VDO instrumentation, and a Blaupunkt AM/FM radio. The original Fjord Green paintwork can still be seen on the door sills, around the speaker holes, and on the dash. The 4 ½” x 15” painted rims with super hubcaps are fitted to Michelin XZX 165 HR 15 tires.

Mechanically powered by a matching 1600cc flat-four Super engine which produces 75hp and is paired to a 4-speed manual transmission (Type 741) with four-wheel drum brakes. Complete with spare tire and Porsche Kardex build sheet. An excellent candidate to perform a ground-up restoration back to its original delivery.

History
For the 1960 model year, the 356A model was out and replaced by the 356B, which was known internally as the T5. It looked similar on the outside, but there were numerous small but important changes to the body. The front bumper had enlarged rim guards that were positioned higher, and the headlights were slightly raised as well. The front indicators came stuck out further and the front lid handle was new. In the back, the lights for the license plate were integrated into the now raised rear bumper, and the reverse light was lowered.

The Porsche 356B was offered with three 1600cc engines, designated the 1600, 1600 Super, and Super 90. The advanced and expensive four-cam Carrera 2 was also available. The 1600 units featured differing compression ratios and carburation resulting in outputs ranging from 60 to 90bhp. The Super 90 variant featured sodium-filled valves and twin Solex P40-11 carburetors. This engine is particularly sought after by collectors due to its high-power output.