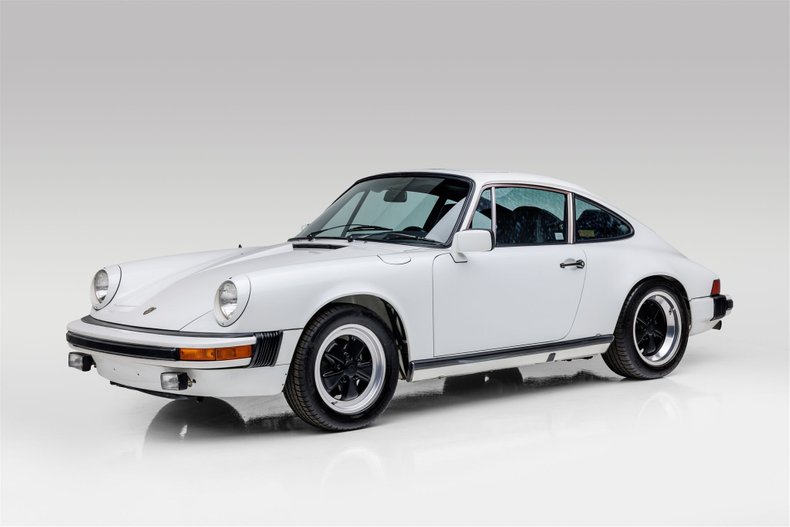 One owner for the past 34 years, a Southern California car, finished in its original color combination of Grand Prix White (908) with a black leather interior. The paintwork is in very nice condition with excellent gaps and panel fit. The interior is original with Sport Seats, carpets, floor mats, door panels, and dash. A Sony AM/FM/CD stereo has been added and additional options include an electric sunroof, air conditioning, and power windows. The undercarriage is in original condition with no evidence of rust. The wheels are 16” anodized Fuch alloys with fogged black centers with Michelin Pilot Sport tires 205 55 16 front and 225 50 16 rear.

Mechanically this 911SC is turnkey with a strong running 3.0 Liter engine, a freshly rebuilt 915 transmission with new synchromesh and bearings, and four wheels disc brakes that stop the car straight. Recently serviced and tuned by Vision Motorsports in Southern California. According to the warranty booklet, this 911SC was first sold by Porsche|Audi in Burbank, California on July 9, 1980, to the first owner. The second owner took possession of this 911 in 1987 and sold the 911 in the Fall of 2021. The 3rd owner has had this 911 since January of 2022 and has enjoyed 3,000 miles of driving but is ready to move into a 964. Complete with collapsible spare wheel, warranty/maintenance booklet, and a 911SC owner's manual. A great opportunity to acquire a very dry and rust-free California 911SC Coupe.

History of the Porsche 911SC (1978–1983)
In 1978, Porsche introduced the new version of the 911, called the '911SC'. Porsche reintroduced the SC designation for the first time since the 356SC (as distinguished from the race-engined 356 Carrera). There was no Carrera version of the 911SC. It featured a 3.0-liter engine with Bosch K-Jetronic fuel injection and a 5-speed 915 transmission. Originally power output was 180 bhp, later 188 bhp, and then in 1981, it was increased to 204 bhp. In 1981, a Cabriolet concept car was introduced at the Frankfurt Motor Show. Not only was the car a true convertible, but it also featured a four-wheel drive, although this was dropped in the production version. The first 911 Cabriolet debuted in late 1982, as a 1983 model. This was Porsche's first cabriolet since the 1965 Porsche 356. It proved very popular with 4,214 sold in its introductory year, despite its premium price relative to the open-top Targa. Cabriolet versions of the 911 have been offered ever since 1983.

It was during this time, that Porsche AG decided the long-term fate of the 911. In 1979, Porsche had made plans to replace the 911 with their new Porsche 928. Sales of the 911 remained so strong, however, that Porsche revised its strategy and decided to inject new life into the 911 editions. 911 SC sales totaled 58,914 cars.

Peter W. Schutz (CEO Porsche AG 1981–1987) wrote: “The decision to keep the 911 in the product line occurred one afternoon in the office of Dr. Helmuth Bott, the Porsche operating board member responsible for all engineering and development. I noticed a chart on the wall of Professor Bott's office. It depicted the ongoing development schedules for the three primary Porsche product lines: Porsche 944, Porsche 928, and 911. Two of them stretched far into the future, but the 911 program stopped at the end of 1981. I remember rising from my chair, walking over to the chart, taking a black marker pen, and extending the 911 program bar clean off the chart. I am sure I heard a silent cheer from Professor Bott, and I knew I had done the right thing. The Porsche 911, the company icon, had been saved, and I believe the company was saved with it.”