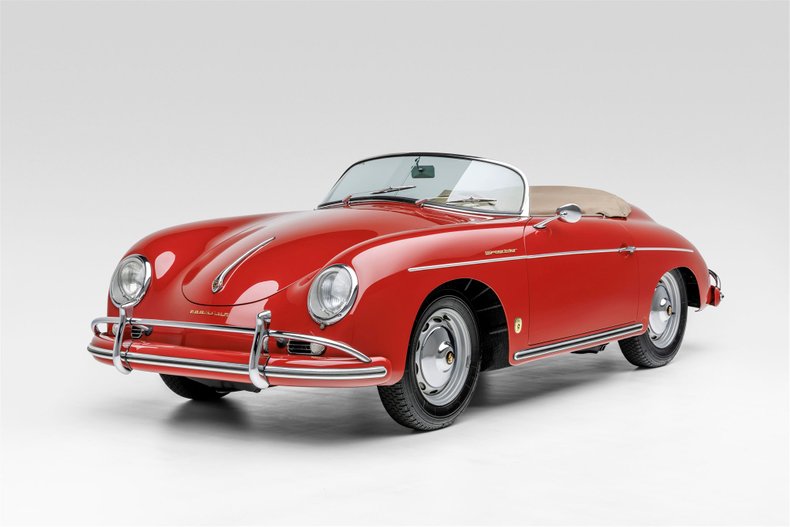 Single-family ownership for over 54 years with California black plates. According to the Porsche Kardex, this Speedster was imported by Hoffman Motors to New York and was originally finished in Red with a Beige leatherette interior. Special ordered with a factory Super 1600cc engine No. 81017 and equipped with U.S. bumpers and sealed beam headlights.

The earliest recorded history on file begins with a registration card from 1967 where the past owner is recorded from Covina, California. Registration cards on file track ownership from 1967-2021. Since 1967 the vehicle was stored in Southern California where it was driven and maintained for nearly three decades. While in California, this Speedster was serviced by Competition Engineering, and any parts were purchased from Stoddard.

By 1999, the Speedster was relocated to Princeton, Massachusetts where it was driven sparingly. After decades of enjoyment, the decision was made to restore the Speedster, a bare metal rotisserie restoration was performed by Paul Russel & Company in Essex, Massachusetts. The restoration commenced in 2011 and over $150,000 was spent. During the restoration the entire chassis was stripped to steel, metal finished, sealed, primed, prepped, and painted in Signal Red. All the panels were pre-fit including the bumpers, overrider bars, windshield frame, and the soft top frame to ensure the absolute best result. All the chrome was triple plated, and all of the components were restored or replaced. The undercarriage was stripped to steel and undercoated along with the engine bay and the front trunk. All the electrical and mechanical components were repaired as necessary using OEM or NOS parts. The Speedster was fitted with new rubber and aluminum trim during the reassembly. The upholstery work includes recovering the dash and front seats in leather with oatmeal German square weave carpets and black rubber mats.

A cosmetic and mechanical restoration was completed in 2014. The paintwork shows beautifully with a very nice fit and finish. Exterior brightwork, aluminum trim, rubber, and glass are all in remarkable condition. The upholstery is in great overall condition with a Les Leston wooden steering wheel, VDO instrumentation, and two-point lap belts. The Lemmerz silver painted wheels are date coded 3/58 and fitted to Michelin XZX 165 SR15 tires. The undercarriage is very nicely detailed including the suspension.

Mechanically powered by a period correct 1600cc Super engine (Type 1600 S) with a 4-speed manual transmission (Type 644) and 4-wheel drum braking system. The engine presents exceptionally well with fresh CAD plate and the engine tin has been powder coated. Complete with a full tonneau cover, Porsche build sheet, photo documentation of the restoration, and 54 years of service records. A rare opportunity to acquire a well-documented and cared-for Speedster.