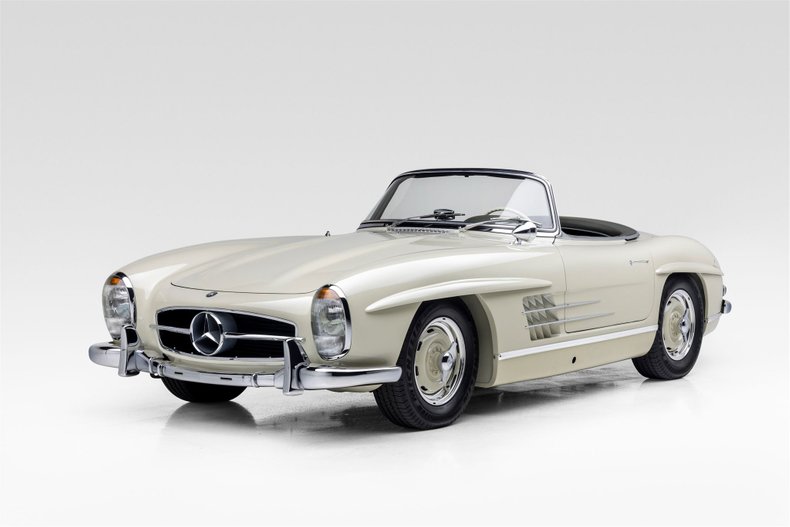 One of 267 300SL Roadsters produced in 1958 and only 1,858 Roadsters were built from 1957 to 1963. A comprehensive body-off restoration was performed by renowned 300SL expert, Jon Cumpton. Finished in a stunning color scheme of White Gray (DB158) with Green leather upholstery, this 300SL Roadster features a matching-numbers engine and transmission. Options include rare and hard-to-find items such as fitted luggage, body-colored Rudge wheels, European headlights, and a factory hardtop.

Travel orders issued by the U.S. Air Force on July 22, 1954, for the 2,266th Personnel Processing Squadron provided a permanent change of assignment and created an opportunity for Colonel Drew P. Hale to be stationed in France. While in France Colonel Hale developed a strong penchant towards Mercedes and eventually decided to purchase a 300SL Roadster. Colonel Hale utilized the Mercedes Overseas Delivery Program and took delivery at the Daimler-Benz A.G. factory in Sindelfingen, Germany. Before coming back home, Hale reportedly spent a couple of years in Paris with the Roadster. By the early 1960s, Colonel Hale had the Roadster imported from France to his residence in Honolulu, Hawaii. Registration cards on file and paperwork indicate that he had the Roadster relocated from Hawaii and shipped to Brooklyn, New York. Colonel Hale was not content with the fast-paced, metropolitan, lifestyle of New York and instead sought out a peaceful retirement setting in Warner Robins, Georgia. While he loved the change of scenery and the ample amount of land, there weren't any Mercedes-Benz service shops within 100 miles of Warner Robins. In a letter dated, November 19, 1975, Colonel Hale wrote to Mercedes-Bens of North America hoping to establish his own Mercedes sales and service facility in Warner Robins, Georgia. On October 6, 1975, Colonel Hale's committed and enthusiastic approach to establishing a new dealership fell short as they terminated the “Binder” program just a few years ago. While in Georgia the Roadster was driven very sparingly and was regularly serviced by marque experts. By 2011, the Roadster had accrued just over 24,000 miles and was sold to the second owner.

After the acquisition, the second owner commissioned Jon Cumpton to complete a comprehensive body-off restoration. The restoration process was approached with an open checkbook, ensuring that no stone was left unturned. During the restoration the body was removed from the frame, media blasted, sealed, primed, and repainted White Gray (DB158). The frame was media blasted and powder coated. The cabin was fully reupholstered in green leather with a dark green-grey soft top. A new wiring harness was installed, and all the gauges were sent out to North Hollywood Speedometer to be rebuilt. The suspension was rebuilt, re-bushed and new shocks were installed. The braking system was restored with a new brake booster and a complete set of brake drums for Knock-off wheels were installed. All the hardware used was original and was cataloged, photographed, tumbled, and recoated with black zinc. The brightwork was cataloged, photographed, and sent out to be triple plated and polished to show condition.

While the Roadster was being reassembled, the driveline was sent to Van Nuys Sports Cars Inc. The engine was completely disassembled, and the crank was magnafluxed. The engine received new main bearings and the connecting rods were rebuilt. New pistons, valves, and cams were installed. The cylinder heads were restored with new seats, valves, and new valve guides. The fuel injection was rebuilt by Pacific Fuel Injection. The engine was reassembled back to factory specification using original hardware. The transmission was completely disassembled and rebuilt with all new synchros and bearings. The transmission was modified and improved through the installation of a rear axle gear (3.25:1) to allow for a more pleasurable driving experience. Every aspect of this 300SL was addressed during its three-year restoration to bring it back to an exceptional standard. It retains the correctly applied factory inspection marks, clamps, hoses, and decals in the engine bay, and it is truly stunning in every respect.

Due to the fastidious care, the paintwork is in remarkable condition with perfect fit and finish. The exterior features beautiful brightwork, rare European headlights, and a factory Hardtop in body color. The upholstery is in pristine condition throughout with factory green leather seats with matching door panels and dash. The factory steering wheel is beautifully presented with a chrome horn ring and sits ahead of VDO instrumentation and a factory Becker Mexico MW/UKW radio. The vertical instrument cluster operates as it should and monitors gasoline level, oil pressure, oil temperature, and water temperature. The body-colored Hardtop and soft top are in outstanding condition and fit evenly with a tight seal. The 5.5” x 15” KPZ Rudge wheels are body-color centers fitted to Michelin Harmony 205 75R 15 tires.