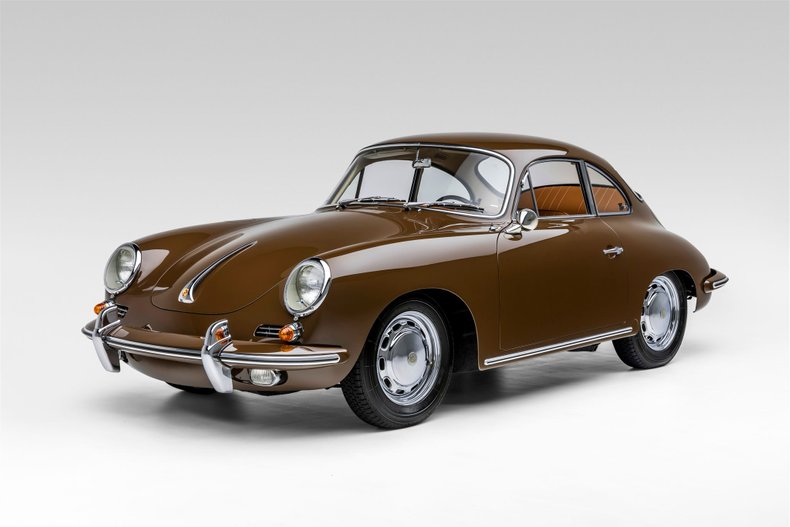 Three (3) owners, California black plate car, finished in a special ordered color Togo Brown (6411) over Fawn leatherette upholstery and retains its matching numbers driveline. Togo Brown is regarded as a premium option and was only available in 1964 and 1965.

In remarkable condition throughout, the paintwork has been executed to very high standards with perfect gaps and panel fit. The exterior benefits from factory glass, polished brightwork, and pristine aluminum trim. The taillights have been upgraded with LED bulbs and optional 128 Hella foglights are installed. Due to the recent upholstery work by Autos International, the interior is in exceptional condition with VDO instrumentation, Blaupunkt AM/FM radio, and a set of Cocoa mats. The Lemmerz 4.5” x 15” chrome wheels are in original condition and are fitted to Michelin XZX 165 SR15 tires.

According to the current owner, the 356C was originally purchased by an airline pilot and was delivered in San Francisco, California. By June of 1972, it was sold to a high school teacher who retired as the principal of a large campus in San Jose, California. She had the vehicle maintained at Modderman Service Inc. in Mountain View, California. The records reflect that she had the engine overhauled at 35,014 on July 16, 1973. The 356 was painted silver on September 30, 1974, and the interior was replaced with a cloth houndstooth. After nearly three decades of storage, the principal sold the 356C to the third and current owner on November 12, 2017.

The 356 was then trailered to All German Auto in Escondido, California. The following work was performed, the fuel tank was replaced, new fuel lines were installed, along with a new battery, and the brake calipers and carburetors were rebuilt at a total cost of $3,932.50. The 356 was at All German from November 2017 until November 2018. During this period both All German staff and the current owner searched for a qualified shop to do the restoration.

John Cato Motorsports in Valley Center, California was chosen to complete the restoration. All the bodywork was done by Larry Petzen, who had over 40 years of experience, most of it at European Auto Body. Petzen was very detail oriented and along with Cato did everything up to the point of the paintwork. Being a California car in storage, this 356 had very little rust. The body was stripped to steel, the body was primed, prepped, block sanded, and repainted in the original factory color. The paintwork took nearly a year from November 13, 2018, until October 2019. The total cost for bodywork and paint was $58,444.00. Over the next two months, the car was moved to Autos International in Escondido, California and over $12,000 was spent using factory Porsche materials. The cabin was reupholstered with Porsche Saddle leather with Tan German square weave carpets. A new headliner was installed along with Coco mats and a new glove box. The interior gauges were repaired and resurfaced by North Hollywood Speedometer and Clock Co. along with the clock. The original Blaupunkt Frankfurt AM/FM/SW U716868 radio was serviced by German Auto Radio Repair in North Hollywood, California. All parts were either restored or replaced and the entire car has been reassembled with new rubber seals.

In January 2020 the vehicle was shipped to John Chambers Motorsports, Ltd. in Valley Center, California in January 2020. John has more than 40 years of experience most devoted to air-cooled Porsches. John rebuilt the engine using 86mm JE pistons, Biral cylinders, and NXG spark plugs. The displacement was increased to 1720cc with approximately 95 horsepower. All the engine accessories were either rebuilt or replaced including the generator, fuel pump, carburetors, and all seals and gaskets. The transmission and drive train were also overhauled including a new clutch and clutch assembly. The suspension was rebuilt using Koni adjustable shocks. The steering box was rebuilt, and a new Koni steering damper was installed. The brakes were rebuilt with new lines, rotors, and master cylinder. A new exhaust system was also installed. An electric fuel pump allows easy starting even if the engine has not been used for several weeks. The generator was rebuilt by Richter Auto & Electric. The engine was detailed to include all original decals.

Powered by a number matching 1600c flat-four engine (Type 616/15) that has been modified with a big bore piston and cylinders and is capable of outputting 95 horsepower. The number matching 4-speed manual transmission (Type 741) shifts effortlessly and is paired with a 4-wheel disc braking system. Complete with original owner's manual, jack, tool kit, Leitz luggage rack, and a complete file of service records. A great opportunity to acquire a 356C Coupe that has been exceptionally well restored and would make an excellent addition to any collection.