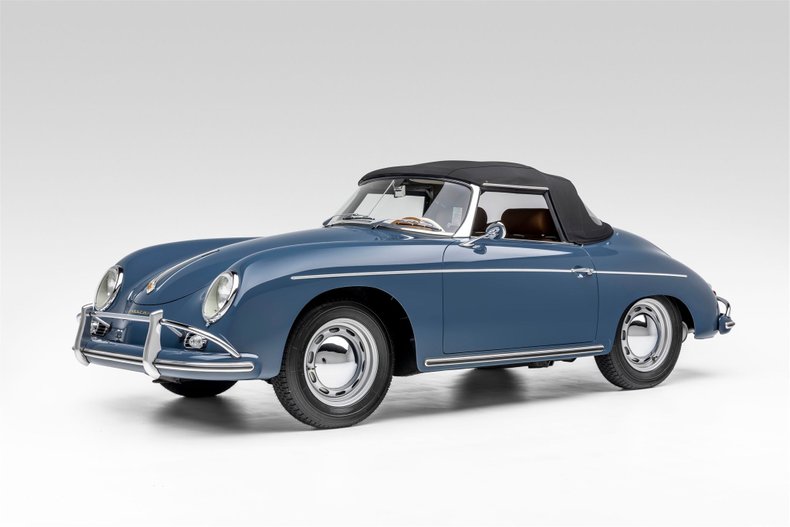 This is the 806th Convertible D built, completed on July 23, 1959. Originally finished in Ivory (5704) with a Red leatherette interior. Factory options include an ashtray, a cigarette lighter, US overrider bumpers, a Ponto Stabil mirror, 2 safety belts, a spare rim, a jack, and a tool kit.

European Collectibles did a Concour restoration on this 1959 Convertible D over 18 months from 2021 to 2022. During the restoration, this 356 was completely disassembled and stripped down to the bare shell so that every aspect could be properly addressed. The body and panels are original and still retain their correct stampings/numbers. All panels were pre-fit with bumpers, overrider bars, a windshield frame, and a soft top to ensure the absolute best result. All the chrome was triple plated, and all the components were restored or replaced.

The exterior has been finished in Aquamarine Blue and has been executed to the highest standard with all original brightwork, new seals, and aluminum trim. The Convertible Ds have many number-matched components, many of which this 356 still retains. Some of those components include the soft top frame, door hinge covers, windshield frame, and door garnish rails. The interior is in pristine condition and is upholstered in Tan leather with German tan square weave carpets, a German black canvas soft-top, along with a black boot cover. The steel wheels are date-coded and painted silver with baby moon hubcaps and fitted to Michelin XZX tires.

Mechanically, it is an amazing 356 to drive! The driveline is all matching and everything component was rebuilt including the engine, transmission, suspension, braking system, fuel system, and a new wire harness was installed. The matching 1600cc Normal engine with 60 horsepower performs flawlessly with plenty of power with the matching manual 4-speed transmission that shifts through all the gears with ease. The four-wheel drum brakes have been completely rebuilt with all new wheel cylinders, brake lines, and master cylinder. Complete with spare tire, jack, tool kit, Porsche Classic Technical Certificate, Kardex, and service records. Absolutely superb in every way, this 356A Convertible D is ready for any Concour events, classic car rallies, or just to drive and enjoy!

History of the Convertible D

The 1958-1959 Porsche 356A Convertible D model is arguably one of the rarest "production" Porsche 356 models ever manufactured for a full year (the T6 "twin grille" Roadster was produced for only a few months). Only 1,331 Convertible Ds were made between August 1958 and September 1959. By 1958 the Speedster model was four years old, and sales were declining. Porsche realized that significant improvements were necessary to attract new buyers, but that there was certainly a market for a "weekend racer" with a removable windshield. The Porsche 356A Convertible D was the solution (though a modern marketing department would have picked a racier name).

Because overall Porsche sales were growing at a steady pace, and the Reutter coachworks were straining to keep up with the demand, Porsche contracted with the Drauz company in Heilbronn to manufacture bodies for the Convertible D (the "D" stood for Karosseriewerke Drauz KG). On July 31, 1958, Porsche sent a letter to all of their Porsche dealers announcing the new "Convertible D" model and specifying the differences.

All in all, the Convertible D is a more practical 356 than the Speedster: a larger windshield, roll-up side windows, and more comfortable seats while retaining the beautiful body lines and the downward sloping beltline that now attracts so many 356 enthusiasts. Of course, some of the minimalist, racier features of the Speedster were lost, and many Porsche purists complained long and loud in 1958!

For the 1960 model year, the Convertible D model was replaced by the 356 B Roadster based on the new T5 body style. However, sales of the "stripped down" 356 continued to decline, and the last year of Roadster production was in 1962 when just 248 T6-bodied cars were made, with production ceasing well before the end of the model year. In the current market, it is ironic that these 356 models that were the least expensive "back in the day" Speedster, Convertible D, and Roadster are now more expensive than the luxury version Cabriolets.