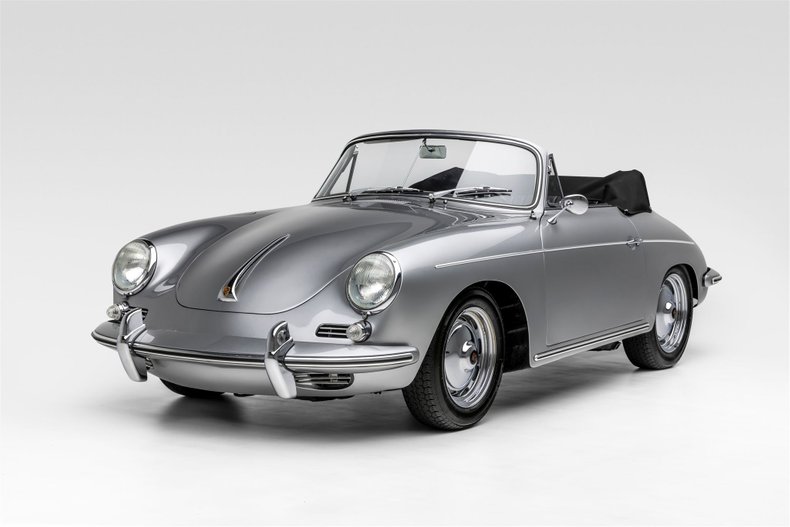 The paintwork presents very nicely and the exterior features aluminum body molding, Bosch sealed beam headlights, and beautiful brightwork. The soft top has been recently upholstered with a new wooden bow, headliner, pad, and German canvas top with a new rear window. The front seats were upholstered with leather faces, new pads, and new charcoal German square weave carpets. A factory VDM steering wheel sits ahead of the VDO instrumentation, a Porsche radio delete plate, and a quartz clock. The 4.5” x 15” chrome wheels are fitted to Sprint Classic Vredestein 165 15 tires (dated 2021) with Super hubcaps. The undercarriage is solid and rust-free and is in excellent condition with a detailed suspension.

Mechanically powered by a strong running period correct 1600cc engine (Type 616/36) producing 100HP, with a smooth shifting manual 4-speed transmission (Type 741) and four-wheel drum brakes. Complete with two keys, a Certificate of Authenticity, Porsche Kardex, and history going back to the early 1990s. 356 Cabriolets are becoming increasingly difficult to find and this is a great value.

History
The 356 B T6 body was the last 356 body change until the end of production. It was introduced in September 1961 for the 1962 to 1963 model year. It featured four-wheel ribbed drum brakes all around with better cooling, as well as three options of the 1600cc pushrod engine. The rear deck now had twin grills for better cooling of the engine, the front hood was squared off in the front and the fuel tank was changed to include an outside fuel fill with a fuel door. The best of all the 356 transmissions was the 741, which was like sifting through butter with full synchromesh manual 4-speed, and of course, the ZF steering box made the 356s a joy in the corners!