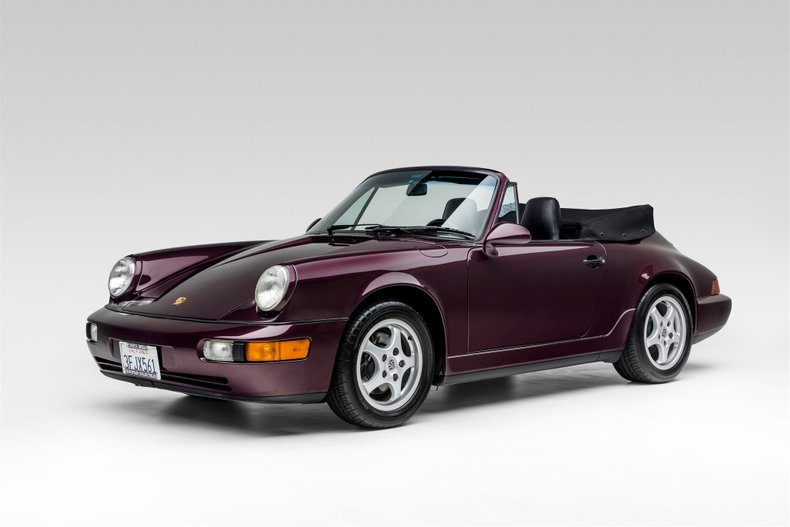 One (1) owner Southern California car, finished in a special ordered paint to sample, color Amethyst Metallic (F9) with a Black leatherette interior. Purchased from Porsche of Santa Monica by the first owner on November 15, 1993, with 36 miles. According to Rennlist, only 283 Cabriolets were built in 1994.

The paintwork is mostly original and the color is amazing with the original glass and integrated fog lights. Verified through the presence of the factory VIN stickers, the doors, decks, and panels are all original to the car. The upholstery is original and features factory air conditioning that blows ice cold, a Becker Porsche CR-1 radio, and VDO instrumentation. Factory Cup 1 wheels are fitted to new Continental Extremecontact tires. The undercarriage is solid and rust-free in exceptional condition.

The Carfax confirms that this 964 Cabriolet is a true one-owner vehicle and tracks a linear progression of mileage from 12,989 in 1995 to 79,572 in 2022. The first 2,000-mile maintenance occurred on May 25, 1994, and was performed by Steve Taub Porsche at 2,514 miles. This 964 has been subjected to routine maintenance performed by Sonnen Motorcars, Beverly Hills Porsche, and Porsche of San Diego. The soft top was replaced on August 3, 2007, by Convertibles Only in Seattle, Washington, and was fitted with a new outer canvas top, headliner, and mid-bow elastics. Most recently, on August 3, 2022, Porsche San Diego was commissioned to perform a complete safety inspection and service. New Continental Extremecontact DWS06 Plus Ultra High-Performance All-Season 205 55 XR16 front and 225 50 ZR16 rear tires have been just installed. A rebuilt air conditioning climate control unit has been installed, along with a new battery, belts (alternator and A/C), and the braking system has been flushed and serviced.