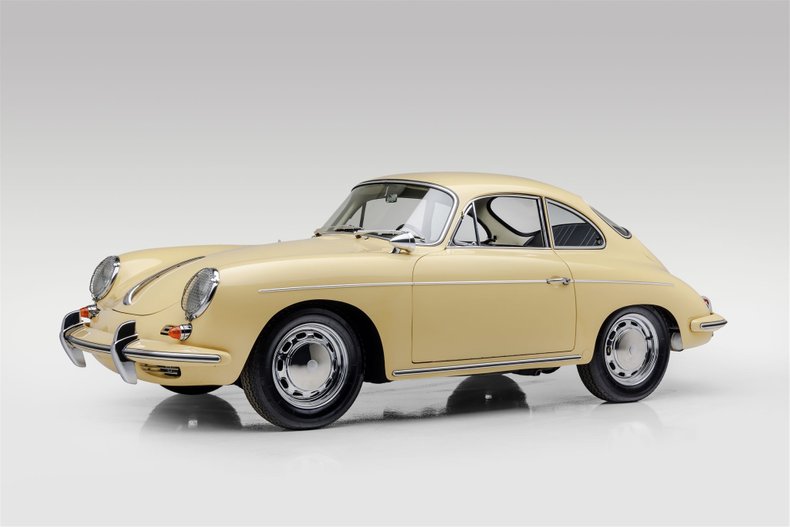 Single-family ownership for 16 years in Southern California and sold to a repeat client in San Diego, California earlier this year. Finished in the original color combination of Champagne Yellow (6405) over Black leatherette upholstery. The paintwork is in great condition with factory-side aluminum body molding. The Hella headlights are protected by mesh stone guard grills and the electrical system is fully operational. The interior is in excellent condition and benefits from a complete refurbishment with everything replaced with the exception of the original door panels. Equipped with VDO instrumentation, original 3-spoke VDM steering wheel, a Porsche radio delete plate, and 5.5” x 15” KPZ chrome wheels that are fitted with new Sprint Classic Vredestein 165 HR15 tires.

Porsche's factory build sheet indicates that VIN 128990 was originally sold by AMAG Automobil und Motoren to the first owner, Mr. Stalder, from Hasle-Ruegsau, Switzerland. On January 1, 2012, Auto's International in Escondido, California supplied a new headliner and a full black leatherette interior which included a dash, door tops, front seats, rear seats, rear panels, and garnish rail covers. The previous owner, who is also a retired Porsche mechanic for over 40 years, did a complete engine and transmission rebuild in 2017. A 74 mm Scat Crankshaft was sourced from Willhoit Auto Restoration, 86mm pistons and cylinders and Carrillo rods were sourced from Shasta Design, the cylinder heads were lightly ported and polished, and the engine was reassembled with all new OEM components. The previous owner completely disassembled the transmission, inspected the internals, and reassembled the transmission replacing any worn components. The result is a fantastic running and driving 356.

Mechanically powered by its matching 1600cc flat-four engine which produces 95 horsepower and runs phenomenally paired to its matching manual 4-speed 741 transmission and four-wheel disc brakes. Complete with spare tire, Certificate of Authenticity, Kardex, and 27 years of service history. Extremely nice driving 356SC Coupe with plenty of horsepower and extremely fun to drive and is well sorted.

History
The 356 was a lightweight and nimble-handling rear-engine rear-wheel-drive 2-door sports car available in hardtop coupé and open configurations. Engineering innovations continued during the years of manufacture, contributing to its motorsport's success and popularity. However, when the T6 got disc brakes in 1964, with no other visible alterations, they called it the model C, or the SC, when it had the optional extra powerful engine. The last revision of the 356 was the 356C introduced for the 1964 model year. It features four-wheel disc brakes, as well as an option for the most powerful pushrod engine Porsche, has ever produced, the 95-horsepower (71 kW) "SC".