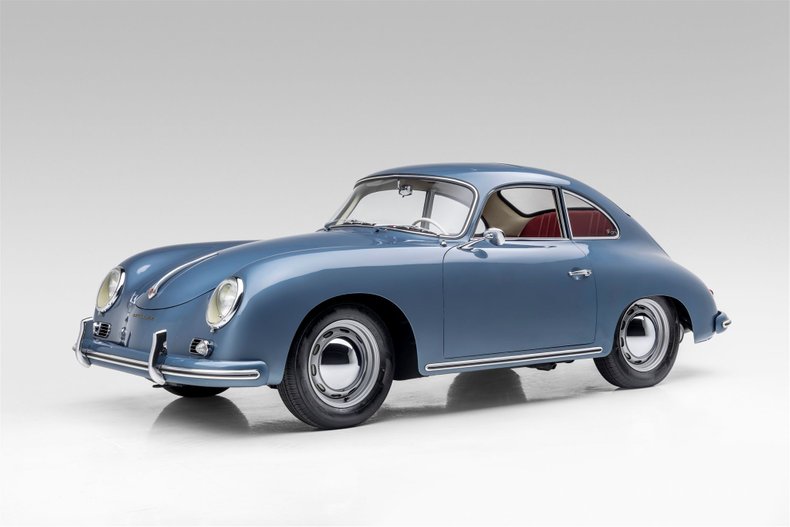 This is the final and most revised iteration of the 356A, a beautiful T2 Coupe that was special ordered from the factory with a 'Golde' Sliding Sunroof. Originally delivered in Meissen Blue (color code 5703) over Red leatherette upholstery. Factory options include Sealed Beam Headlights, 'Golde' Sunroof, USA Bumpers, and Dunlop Tires.

This 356 was restored in the San Francisco Bay area about 16 years ago, finished in Aqua Marine Blue Metallic and it does have a few paint imperfections with excellent gaps and panel fit. Overall it is in excellent driving condition. The upholstery is in beautiful condition with Oatmeal German square weave carpets and Tan CoCo mats. A factory steering wheel sits ahead of the VDO instrumentation with matching escutcheons and a Blaupunkt radio. The decks are original to the car with 778 stampings in the factory locations. The wheels are painted silver with baby moon hubcaps and new Vredestein tires. The undercarriage is in great condition and is solid and rust-free.

Powered by the matching numbers 1600cc flat-four engine (type 1600), the top end of the engine was rebuilt and runs phenomenally paired to a smooth-shifting 4-speed manual transmission (type 716) with the four-wheel drum braking system. Complete with jack, spare wheel, and owner's manual. This is the last year of the 356A and it is truly one of the best 356As to drive. One of the most desirable 356s and these are indeed getting very difficult to find!

By 1958, all pushrod motors were 1600cc. The suspension changes introduced on the 356A resulted in the most significant improvement to the 356's handling during the entire 356 production run. In addition to the front anti-roll bar introduced near the end of pre-A production, oversteer was further tamed by adding softer front springs, stiffening the anti-roll bar, and doubling the caster angle. The understeer was engineered into the chassis with updates to the steering linkage and softer rear suspension. Longer, more vertical rear shocks were also added. The wheels were widened to 4.5 inches and the diameter decreased to 15 inches rims. The windshield was now curved instead of bent. The dashboard was flat. Body styles included Coupes and Cabriolets and two types of Roadsters, the iconic Speedster, and its successor in 1959, the one-year-only Convertible D.