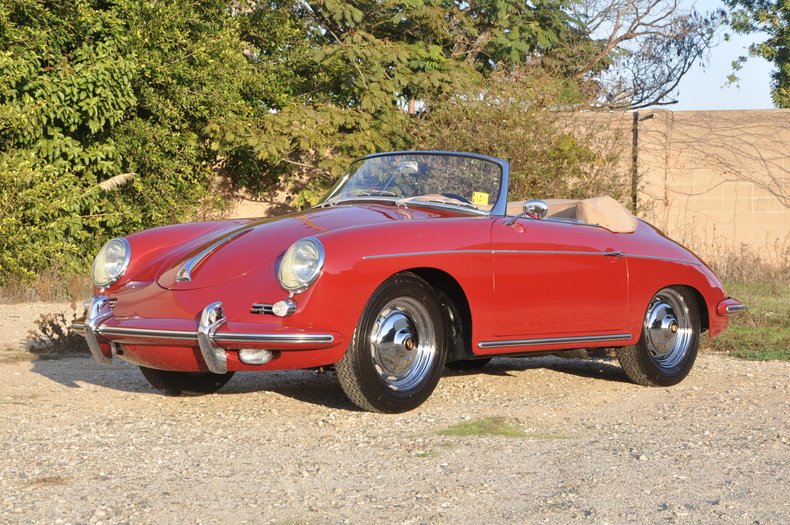 Porsche's popular 356 Roadster was introduced for the 1960 model year as a replacement of the one-year-only Convertible D, the Speedster's more civilized successor. The new T-5 Roadster brought several marked changes in appearance: The front fenders and headlamps were raised, as were both the front and rear bumpers, to better deal with urban parking. New vertical bumper guards also helped in that respect. New brake-cooling intakes were added to the nose below the front bumper. The new Roadster shared many of the comfort attributes of the Convertible D, including roll-up windows, comfortable seats, and a well-constructed convertible top with a tan-painted frame and wraparound plastic rear window. For those with competition in mind, the windshield could be removed, and roadsters, like the Speedster and Convertible D, soon became popular in amateur sports car racing around the world.

This highly-optioned 1960 Porsche 356B 1600 Super Roadster (VIN# 87440) was an early Drauz build on January 15, 1960. It was ordered directly from Porsche by the original owner, Captain Marvin D. Garrison Jr., who took delivery of the Roadster at the factory in Stuttgart, Germany and eventually imported it to his home in Santa Ana, CA. In 1972, the Roadster was sold to John A. Weller Jr. of Miami, FL who remained its caretaker and maintained it for the next 43 years. In 2015, its current owner, a National Parade Grand Champion winning collector and experienced Porsche restorer, purchased it from the aging Mr. Weller knowing it was in need of a substantial restoration.

During the 43 years of Mr. Weller's ownership, he changed the exterior color from the original factory (6002) Ruby Red to (6013) Gloss Black and replaced the damaged original 1600S motor with an upgraded later model 356C engine. As the complete bare-metal rotisserie restoration ensued, the correct single-stage (6002) Ruby Red paint was reapplied and a rare correct three-piece 1960 1600S engine case was sourced and became the basis of a completely new motor build. Astonishingly, the 1960 1600S case that is in the Roadster today was cast in Stuttgart within days of its original motor.

The engine along with the work on the completely-restored transaxle was done in Miramar, CA by Porsche marque specialists, Personalized Autohaus Inc.. In addition to the core drivetrain work, they also reconstructed the entire brake and steering systems as well as every suspension component. After having an entirely new wiring harness fabricated, they completed an end-to-end restoration of the electrical system. Other components throughout the Roadster were given the same level of attention to detail as the mechanicals including the restoration of the original 1960 Roadster steering wheel by Kock's, who recast the original rim in the correct factory mold, restored the hub assembly and cover, and replated the 356B center chrome spokes. The hand-crafted full-leather interior, German square weave carpets, and the completely new premium soft-top systems and boot cover were commissioned by European Collectables in Orange County, CA. The Roadster is shod (spare included) with the correct new 165HR15 Michelin XAS Tyres sourced from Longstone in England. This Roadster retains a copy of the original factory Kardex, a Porsche Certificate of Authenticity, and the correct 356B tool kit.

Since completion of the multi-year restoration in mid-2016, this terrific example of the highly sought after two-year Roadster model has only experienced limited break-in miles in California.