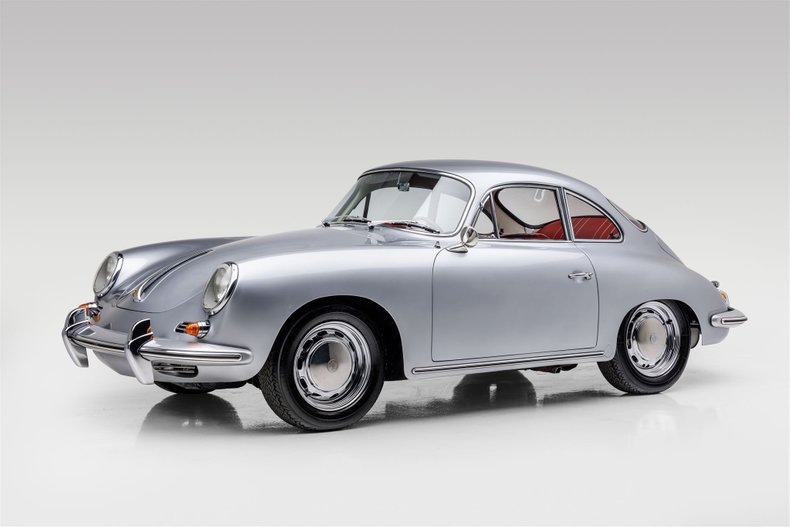 California 356, single-family ownership for 27 years, finished in Silver Metallic over a Red leatherette upholstery. The paintwork is in fantastic condition with excellent gaps and panel fit. The cabin features perforated red leatherette seat centers, door panels, and new Red German square weave carpets that were recently installed. The Silver Metallic painted dash is equipped with VDO instrumentation, a clock, and an AM/FM stereo (the original radio and amplifier are also included in the sale). Due to a long life in California weather, the undercarriage remains in exceptional condition with no rust. The chrome wheels are 4.5” x 15” fitted to Vredestein Sprint Classic tires.

According to the past owner, this 356 has remained a California car since new. It was acquired in 1995 and the following year a decision was made to do a complete restoration. From 1996 to 1997 the vehicle was repainted in Silver Metallic. The body was reassembled with replated OEM chrome, rubber seals, and moldings. Following the assembly, the 356 was fitted with new suspension components, a new interior, and the driveline was completely overhauled. After the restoration, the vehicle was sparingly driven and was stored in Northern California until 2015. The 356 was then moved to Southern California where it was used for local driving events, car shows, and occasional cars and coffee on the weekends.

European Collectibles recently was commissioned to perform a full tune-up and valve adjustment, the transmission was rebuilt, a new windshield was installed, the rear deco trim was replaced, and four (4) new Vredestein Sprint Classic tires were mounted and balanced.

Mechanically, it is powered by the matching 1600cc flat-four engine (Type 616/15) with larger Solex P40 carburation and intakes producing over 80 horsepower paired with a 4-speed manual transmission (Type 741) and four-wheel disc braking system. It is an incredible 356 to drive! Complete with tool kit, date-coded spare tire (2/64), owner's manual, and Certificate of Authenticity. The 356C holds a special place in Porsche history, not only as a sales success but as an icon of one of the BEST 356s to drive.