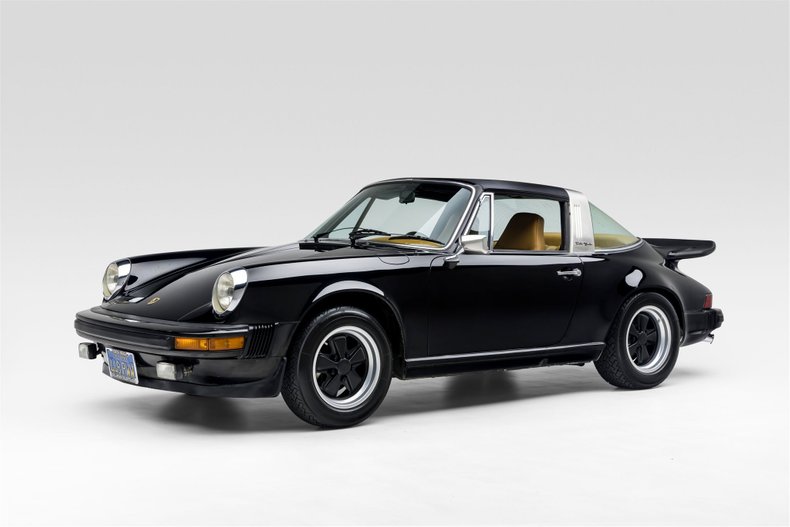 Single-family ownership for over four (4) decades, believed to be 35,167 original miles, finished in the original factory color combination - Black (700) with a Tan leather interior. According to the past owner, this Porsche was first purchased from Westwood Porsche Audi in Santa Monica, California. Registration cards verify ownership of the 911 Carrera from 1978 until the late 2000s and was eventually handed down to the son. It was last serviced by Westwood Porsche Audi on January 2, 1978, and has been stored in Orange County ever since. When it came time to sell the Targa it was offered to a family friend, who had been familiar with the Carrera since he was four years old.

Paint meter readings confirm that the paintwork is all original and displays some patina for a 911 of this vintage. The exterior features Carrera script delete, original glass, integrated fog lights, and a Targa top with a tight seal. The upholstery is in original condition with new German carpets and a headliner has been recently installed. Interior options include factory Recaro sport seats, air conditioning, and an FM/AM cassette tape player. An original leather-wrapped Carrera steering wheel sits in front of VDO instrumentation with a 150-mph speedometer and an 8000-rpm tachometer. The undercarriage remains all original with no signs of any rust. Staggered, refinished, Fuchs wheels with black center caps are fitted to Pirelli Cinturato CN36 185 70 R15 fronts and 215 60 R15 rears tires.

Powered by a 2.7-liter flat-six engine, rated at 175 horsepower with 167 lb-ft of torque with a 5-speed manual transmission (Type 915) and four-wheel disc brakes. Complete with original owner's manual/maintenance record booklet, tool kit, collapsible spare tire, registration cards going back to 1978, and recent service history. This is a rare opportunity to acquire a very low-production US Carrera Targa in amazing original condition.