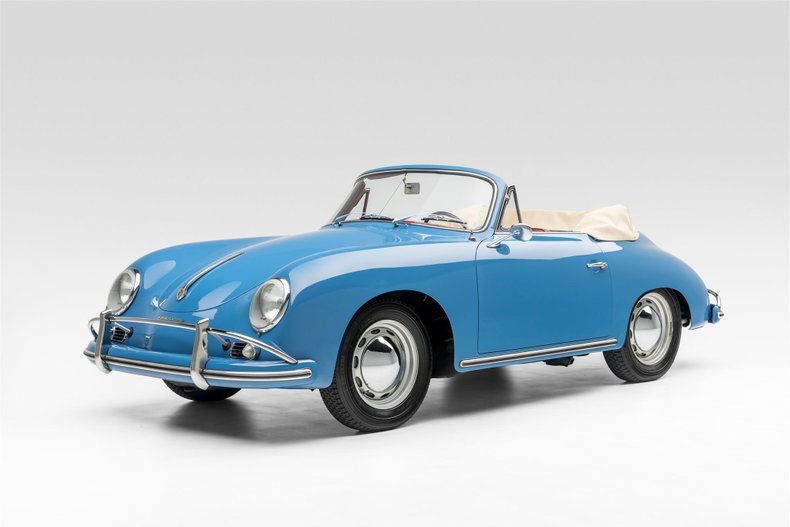 A phenomenal example of the final year of the 356A Type 2 Cabriolet, special order exterior color Amalfi Blue over Red Leatherette with Corduroy inserts. This US Reutter Cabriolet was initially distributed by Hoffman Motor Car Company of New York, New York. Factory options include US Bumpers, Boge Shock Absorbers, and Dunlop Tires.

According to the Porsche Kardex, this 356A Cabriolet was delivered to its first owner Hermann W. Moeller in Middle Village, New York. The second owner, Will Nielsen, is also listed who had the 356 relocated to San Diego, California on June 5, 1960. Not much is known about the early history of the 356 aside from a written summary of the 356's history compiled by one of the previous caretakers. According to the previous owner, this Cabriolet was eventually acquired by Robert Thomajan, who was a well-known lawyer and philanthropist. Mr. Thomajan reportedly purchased the 356, sight unseen, from a San Antonio Porsche dealership. Mr. Thomajan moved to Austin, Texas in the late 1980s to open a branch of the New York law firm, Milgrim, upon which he built his reputation. The subsequent owner, Mr. George, was offered the 356 and was invited into Mr. Thomajan's warehouse where he was met with an extensive collection of rare cars and antique motorcycles. After reviewing the 356, without hesitation, Mr. George purchased the Cabriolet in 1986 for $22,000. Under Mr. George's ownership, the Cabriolet was subjected to a full bare metal restoration. By 2014, the Cabriolet was sold to its successive Texas owner who had the 356 reupholstered to original specifications by Autos International. In 2018, it received a full service with new shocks, a new battery, and the Zenith carburetors were rebuilt and tuned. Most recently, European Collectibles has done a complete rebuild of the drum braking system, the undercarriage has been thoroughly detailed to show condition, and a full service and safety inspection was performed.

The paintwork is in excellent condition with aluminum trim, fresh rubber seals, and polished brightwork. The exterior is equipped with US overrider bumpers, factory glass, and a tan canvas soft top. The decks are original to the car with “812” stampings in the factory locations. Other original components include the date-coded fuel tank, seat recliners, and Reutter soft top frame No. 67349. The interior has been recently reupholstery according to factory specifications and is in exceptional condition. A VDM steering with a deluxe horn ring sits ahead of factory VDO instrumentation and a Blaupunkt AM/FM radio. The undercarriage is fully detailed and is in show condition. The 4.5” x 15” painted wheels are date coded with baby moon hubcaps fitted to Micheline XZX 165 SR15 tires (2020).

Powered by a matching 1600cc Normal engine with 60 horsepower that performs flawlessly with plenty of power with a matching manual 4-speed transmission that shifts through all the gears with ease. This 1959 Porsche 356A 1600 Reutter Cabriolet is numbers-matching throughout. The 356 has been verified by Porsche Kardex and also comes with a Porsche Certificate of Authenticity. The sale of the vehicle includes the owner's manual, jack, spare tire, tool kit, and history. Look no further if you have been in the market for a rare and eye-catching 356 Cabriolet with its original driveline.

History
The Porsche 356 is a lightweight and nimble rear-engine sports car with rear-wheel-drive, available in both hardtop coupe and convertible configurations. Production for the Porsche 356 began in 1948 and continued until 1965. Of the 76,000 models originally produced, it's believed that just approximately half survive. Engineering innovations to the 356 continued well into the model's later years, contributing to the car's success in motorsports and overall popularity. Each subsequent model of the Porsche 356 gained an enthusiastic following; with them came mechanical improvements, added comfort, and increased drivability. The beautiful minimalistic design and enjoyable ride of the Porsche 356As is only part of what makes these models so desirable, as they truly represent the core nature of the brand.