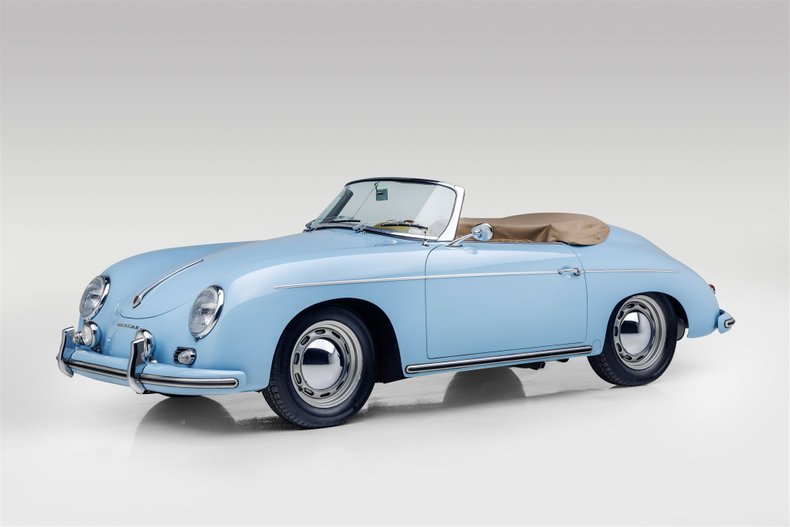 California 356 for two decades, this stunning Convertible D is presented in Meissen Blue over Cashmere upholstery. The exterior is in excellent condition with perfect gaps and panel fit, with beautiful brightwork, chrome wheels, and Marchal driving lights. The upholstery is like new featuring correct door panels, VDO instrumentation, a fire extinguisher, and a VDM three-spoke wood steering wheel. The silver-painted rims are 4.5” x 15” with baby moon chrome hubcaps fitted to Sprint Classic Vredestein 175 70 R15 tires. The same high standards of excellence is reflected in the mechanical condition with a properly detailed engine compartment, suspension, and undercarriage.

A one-year-only model, the 1959 Porsche 356 A Convertible D retained many styling cues from the Speedster while adding practicality through a taller windscreen, windup windows, a more substantial taller soft top, and more comfortable seats. This Convertible D was delivered new to Hoffman Motors in New York, New York, and was originally finished in Silver Metallic with a Red leatherette interior. The 356 has since been refinished in period-correct Meissen Blue over a Cashmere interior. Following the purchase of this Convertible D in 2019, the current owner commissioned Shamrock Racing Inc. to do a complete transmission rebuild, braking system overhaul, and engine service. Subsequently, the engine compression was tested and was found to be at 125 lbs with a 2% leak down across all four cylinders.

Mechanically, powered by a matching driveline, the 1600cc Normal engine (type 1600) produces 60HP and has plenty of power paired with a 4-speed manual 716 transmission and four-wheel drum braking system. Complete with Certificate of Authenticity, service records of recent work, spare wheel, tool kit, jack, and tonneau cover. A rare and versatile alternative to the Speedster, this is an attractive and well-presented 356 that offers an excellent opportunity to acquire an increasingly sought-after Convertible D model.

History of the Convertible D
The 1958-1959 Porsche 356A Convertible D model is arguably one of the rarest "production" Porsche 356 models ever manufactured for a full year (T6 "twin grille" Roadster was produced for only a few months). Only 1,331 Convertible Ds were made between August 1958 and September 1959. By 1958 the Speedster model was four years old, and sales were declining. Porsche realized that significant improvements were necessary to attract new buyers, but that there was certainly a market for a "weekend racer" with a removable windshield. The Porsche 356A Convertible D was the solution (though a modern marketing department would have picked a racier name!).

Because overall Porsche sales were growing at a steady pace, and the Reutter coachworks were straining to keep up with the demand, Porsche contracted with the Drauz company in Heilbronn to manufacture bodies for the Convertible D (the "D" stood for Karosseriewerke Drauz KG). On July 31, 1958, Porsche sent a letter to all their Porsche dealers announcing the new "Convertible D" model and specifying the differences.