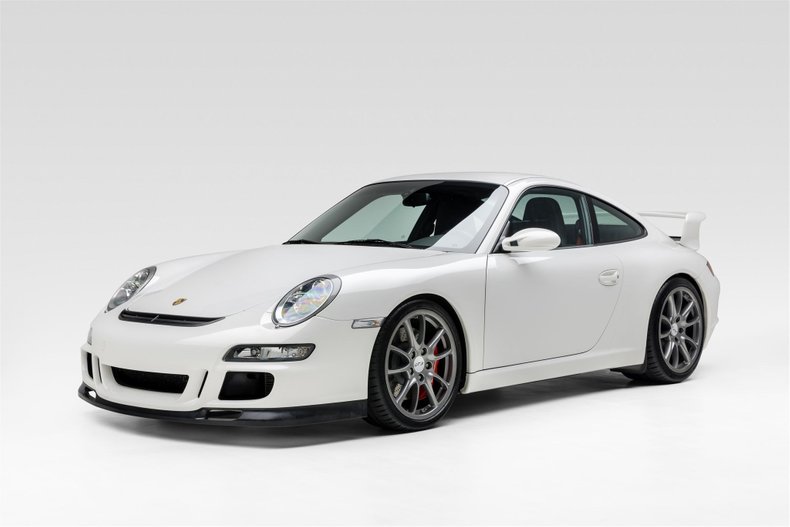 This is a Southern California 997 GT3 with only three (3) owners. Delivered January 11, 2007, to the first owner in Huntington Beach, California. The title was issued on February 28, 2008, and the second owner was reported. The third and current owner was reported on November 18, 2009, with 5,237 miles and finished in Carrara White over Black leather and Alcantara interior. The paintwork is in superb condition with an aluminum front hood, doors, and center-exit exhaust outlets. The interior features bolstered hard back sport seats trimmed in black leather and Alcantara. Additional equipment includes automatic climate control with air conditioning, an Alcantara headliner, cruise control, and a factory stereo system. 19” gray finished wheels are fitted to Michelin Pilot Sport 235 35 ZR19 Front, and 305 30 ZR19 Rear tires.

According to the Carfax, this 997 was serviced by Newport Auto Center on October 02, 2009, with 5,208 miles. December 28, 2010, McKenna Porsche in Norwalk, California did a service, the fluids were checked, the oil and filter were changed, and the tire condition was checked at 12,008 miles. On August 13, 2013, McKenna Porsche performed a 20,000-mile service at 14,861 miles. On July 11, 2017, at 21,756 miles, Haydon Bros in Anaheim, California performed an engine out service where the rear main seal, clutch disc, flywheel bolt, crank seal, throttle seal, coolant pipes, spark plugs, rear deck lid shock, oil filter, and all fluids were replaced, the total spent was $8,575. On August 12, 2020, Haydon Bros installed a new Bosch starter and $2,229 was spent. On January 21, 2022, at 28,135 miles, Haydon Bros did a full service and inspection, the cooling system was pressure tested and checked for anti-freeze leaks inspect coolant hoses and clamps, remove the air filter housing, and inspect serpentine belt condition and inspect belt tensioner and rollers. The GT3 was connected to the Porsche computer and a full diagnostic program was run to check for faults (none present). The engine oil and oil filter were changed, the brake fluid was vacuumed from the reservoir, new brake fluid was added, and the system was pressure bled $1,056 was spent. The current mileage is 28,943.

The naturally aspirated water-cooled flat-six 3.6 Liter with 12:1 compression ratio and an 8,400-rpm redline. Producing 415 horsepower at 7,600 rpm and 300 lb-ft of torque at 5,500 rpm. Power is delivered to the rear wheels through a six-speed manual transaxle with a limited-slip differential and four-wheel disc braking system. Complete will all dealer supplements, owner's manual, maintenance booklet, clean Carfax, and recent service history receipts. An excellent opportunity to acquire a well-serviced, low-production, documented 997 GT3.