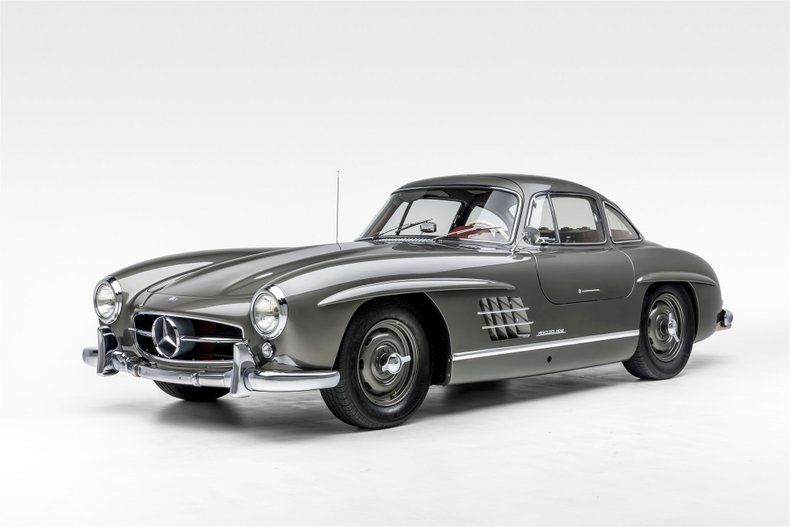 Chassis number 5500235 was completed on April 24, 1955, and delivered in White (DB050) with a Black leather interior. Equipment from the factory included Rudge Wheels, a Becker Mexico radio with a short wave adapter, and a tool kit. Presently finished in a stunning color combination of Anthracite Metallic (DB172) with a Red Wine leather interior. From 1954 to 1957 only 1,400 Mercedes-Benz 300 SL Gullwings were produced and is one of the greatest sports cars of all time.

According to the extensive documentation on June 23, 1958, a copy of the purchase agreement records the sale of the 300SL from the first owner, Norma George from Arcadia, California, to David Vaughan. Mr. Vaughan, the second owner, studied art at Columbia University and in Paris at Académie Colarossi. After he completed his studies, Mr. Vaughan moved to Costa Mesa, California, and taught at Orange Coast College as an art professor. Based on the registration cards on file, registration in California was continuous from 1958 to 1977. By 1978, Mr. Vaughan's wife submitted the 300SL to the Briggs Cunningham Museum in Costa Mesa, California where it was on display until the Museum closed in 1987. On June 10, 1987, the 300SL was sold to Hans Oesteritz in Alhambra, California the third owner with 50,313 miles. By the late 1990s, the 300SL was acquired by Peter Thomas 300SL Specialist where the car was serviced by Bill Richardson Restoration and Machine Werks in Phoenix, Arizona. Peter Thomas then sold the 300SL to the fifth owner from San Rafael, California on August 10, 2000, who owned the 300SL for the next two decades until December of 2022.

Following the sale of the 300SL in August of 2000, the 300SL was transported to a noted Mercedes 300SL Specialist Rudi & Company in Victoria B.C. Canada. The 300SL was treated to a comprehensive cosmetic Concours restoration where the exterior was disassembled, stripped to bare metal, primed, and repainted in Anthracite Metallic (DB172). Subsequently, the interior was fully upholstered with the correct German materials, and leather luggage and other parts were sourced from Star Classics Inc in Scottsdale, Arizona specializing in parts for 1950s Mercedes. After the restoration was completed, the owner attended multiple Concour events from 2001 to 2006. These events include Shriner's Hospitals Concours, Silverado Concours, Classics by The Sea, Wine Country Concours, Palo Alto Concours, Ironside Concours, Hillsborough Concours, Niello Concours at Serano, and The Quail.

By 2007 the 300SL was transported to Marx Mercedes in Costa Mesa, California to be serviced. Over $120,000 was spent with Marx Mercedes from 2007 to 2015. The engine was rebuilt, a complex and intricate process requiring expertise and precision. This task was accomplished by the distinguished 300SL expert, Steve Marx. On January 22, 2015, Marx Mercedes, removed the engine from the car and performed a full rebuild to NLS specification at 70,126 miles. Only OEM or NOS hardware was used. Following the engine rebuild, a BMW 5-speed transmission was sourced from HK Engineering and was installed. As a result, this 300SL Gullwing has improved performance and drivability.

The high-level restoration carried out in the early 2000s has been well preserved and shows incredibly well with excellent gaps and panel fit. The exterior features factory “Sekurit glass, pristine brightwork, aluminum trim, and a 3M clear bra that protects the front nose. Due to the fastidious care over the years, the upholstery is in excellent condition with Red Wine leather seats, dash, transmission tunnel, sills, and luggage. The interior is equipped with a factory Mercedes steering wheel, VDO instrumentation, and a fire extinguisher. The KPZ Rudge wheels are date coded 3/55 and fitted to Michelin 205 70 R15 tires. The undercarriage has been recently detailed and presents nicely with all factory-numbered components.