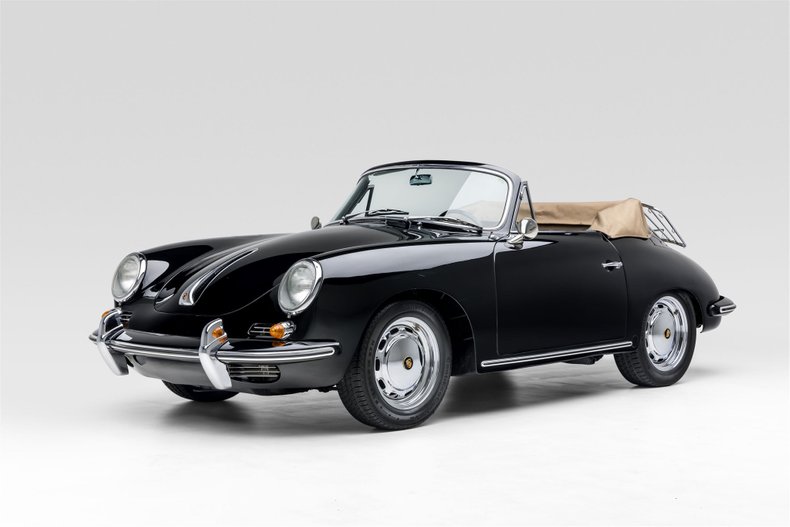 The final production was the 356C model, finished in a desirable color combination of Black (6413) with a Black leather interior, Tan top, and Tan boot cover. According to the Porsche Kardex, this 356C Cabriolet was originally finished in Ruby Red (6402) over a Black leather upholstery.

The paintwork is in beautiful condition and has been well-maintained over the years with some patina. The brightwork, rubber seals, aluminum trim, and factory glass presents very well. Exterior equipment includes dual Durant exterior mirrors, a Hirschmann antenna, and a chrome luggage rack. The interior features black leatherette seats, dash, door panels, and rear seats with Tan German square weave carpets. A factory VDM steering wheel sits ahead of VDO instrumentation and a Blaupunkt AM/FM radio. 5 ½” x 15” Lemmerz chrome steel wheels are fitted to Continental Conti Eco Contact 2 195 60 R15 tires. The undercarriage has been fully detailed and is in excellent overall condition with no rust.

According to the Porsche Kardex, Porsche of America Corporation (PoAC) in Teaneck, New Jersey delivered this 356 to the first owner Philip Hayes from New Canaan, Connecticut. From the detailed summary of the vehicle's history prepared by the third owner, William Simmons was the second owner, who purchased the 356 on June 24, 1977, and the 356 was driven to Atlanta, Georgia. Mr. Simmons had the vehicle completely reupholstered with charcoal carpets and black leather seats. After the vehicle was upholstered, the 356 was prepared for show and display in the Spring of 1977 and took second place at the Sebring Concours d' Elegance. On June 24, 1977, the Cabriolet was purchased by Mr. Gellner who had the vehicle transported to Atlanta, Georgia. In the summer of 1980, Mr. Gellner commissioned Jay Clarke of Import Dynamic to complete ground-up restoration. The exterior was totally disassembled, stripped, primed, and repainted with Black acrylic enamel. The original chrome was sent out to be re-chromed. The engine was rebuilt, and the sheet metal was detailed. The undercarriage had new floor pans, a battery box, and longitudinals installed. As a result, the Cabriolet was finished to a high level to be shown at Coucour events.

During the 1980s, this Cabriolet collected a number of first-place trophies at Concour sponsored by Porsche Club of America which included Rennfest, Peachstate Region's premier event, and other Southeast area region shows. At the 1986 Rennfest, the 356 was honored with the People's choice award. The Cabriolet was featured in articles in the Porsche Panorama magazine in October of 1986 and in May of 1990 issues.

Mechanically powered by a factory KD 1600cc replacement engine (No. KD 731223) that runs phenomenally paired to the matching 4-speed manual 741 transmission (No. 79633) with four-wheel disc brakes. Most recently, European Collectibles has performed the following; rebuilt the carburetors, install new spark plugs, plug wires, set the points, and perform a full engine tune. Lastly, the undercarriage was treated to a full detail and five new Continental tires were installed. Complete with the Porsche Kardex, spare wheel, tool kit, boot cover, and history going back to the 1980s. The 1964 Porsche 356C Cabriolet holds historical significance as the last of its kind and as a representation of the evolution of Porsche's sports car design during the 1950s and 1960s. A rare opportunity to acquire a turnkey 356C Cabriolet in wonderful condition in a great color combination.