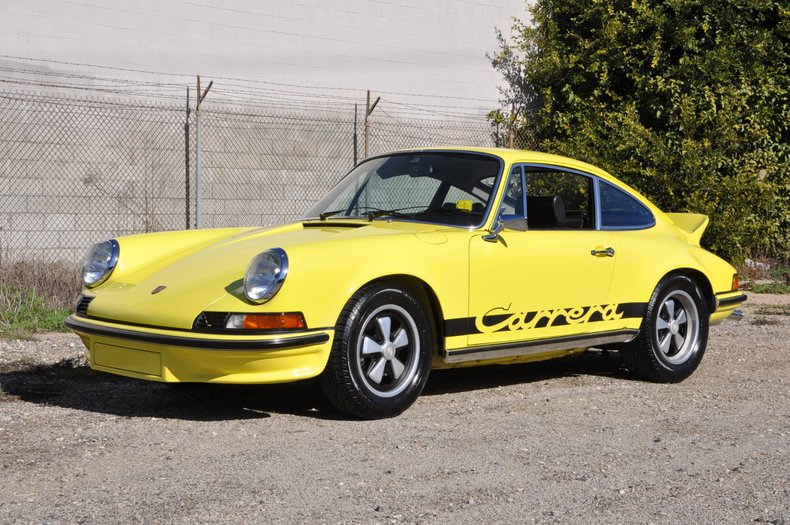 According to Porsche factory records, this superb Carrera RS 2.7 was completed in May 1973. Originally specified for German delivery, this 911 was finished in Light Yellow (117) – over a Black leatherette interior and optioned with a sport driver's seat, headrests, muffler skirt and Pirelli tires P6000 tires.

The RS was brought into the US in the late 1980's. By 1991, noted Porsche enthusiast Phil Bagley of Klub Sport Racing is recorded as owning the car and the earliest bill on file dates from 1994, when ANDIAL of Santa Ana, California, performed a comprehensive service.

While in the US, the RS has been kept in the care of several prominent Porsche collectors, including Dan Rosenthal, Frank Enea and Kim Watkins. One of the past owner, a knowledgeable collector and vintage racer, was immediately struck by the distinctive appearance of this 2.7 RS and, since adding it to his stable, has performed a great deal of work to ensure that it presents at its very best.

The transmission, clutch, hydraulic chain tensioners, SSI headers, brake system, tires, suspension, fuel-injection pump and cylinder heads have all been rebuilt or refurbished within the last 5,000 miles. Both the engine and gearbox are the matching components. The interior has just been re-upholstered in full “Touring” trim by a noted Porsche specialist.

Today, the RS is presented in its dramatic, factory-delivered color scheme of Light Yellow and is equipped with correct 7- and 8-inch Fuchs wheels, M 472 Touring trim, NOS Bosch H-4 lamps and a stainless steel muffler skirt. Furthermore, the sale of this RS includes a Certificate of Authenticity from Porsche, tool kit, owner's manual and jack.