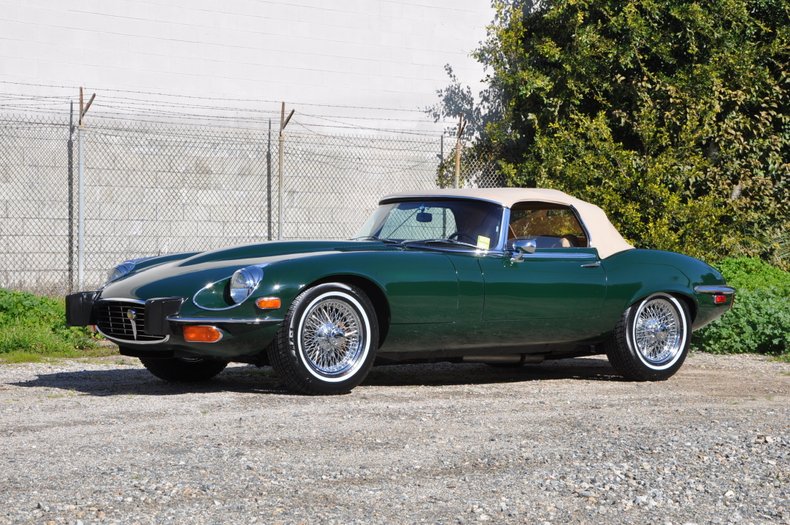 The E-Type Series III was introduced in 1971, with a new 5.3 Liter twelve cylinder Jaguar V12 engine, uprated brakes and standard power steering. Optionally automatic transmission, wire wheels and air conditioning were available. The brand new V12 engine was originally developed for the 24 Hours of Le Mans! It was equipped with four (4) Zenith carburettors. The final engine was claimed to produce 203 kW (272 horse power), more torque, and a 0-60 mph acceleration of less than 7 seconds.

The newly used longer wheelbase now offered significantly more room in all directions. The Series III is easily identifiable by the large cross-slatted front grille, flared wheel arches, wider tyres, exhaust tips and a badge on the rear that proclaims it to be a V12.
Cars for the US market were fitted with large projecting rubber bumper over-riders (in 1973 these were on front, in 1974 both front and rear) to meet local 5 mph (8 km/h) impact regulations, but those on European models were considerably smaller. US models also have side indicator repeats on the front wings.

The Jaguar factory claimed that fitting a set of Jaguar XJ12 saloon steel-braced radial-ply tyres to a V12 E-Type raised the top speed by as much as 8 mph. The production car was fitted with textile-braced radial ply tyres. This fact was reported by the editor of The Motor magazine in the long-term test of his E-type edition dated 4 August 1973, who ran a V12 fixed head for a while.
Robson lists production at 15,290.

This is a wonderful running and driving example. Original color combination in classic British Racing Green with Biscuit. Rebuilt carburetors, brakes and runs perfectly! Very desirable 4-speed manual transmission withn wire wheels and air conditioning. What more could you ask for! The LAST of the E-Type Jaguars.