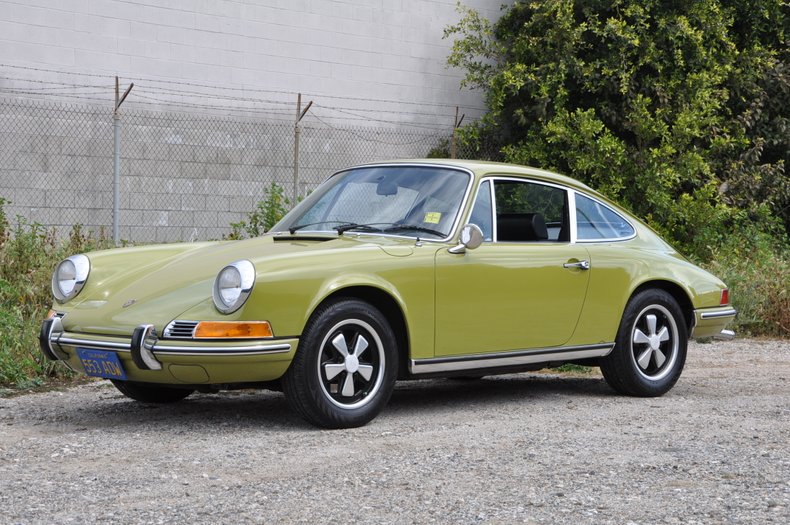 In 1969 Porsche stretched the wheelbase of the 911 and 912 2.3 inches and added fender flares to the front and rear wheel arches. They also added substance to the interiors of the “long wheelbase” cars by trimming the dash differently and adding solid door pockets, shoulder belts and head rests in the seats. The reason Porsche stretched the wheelbase was to tame the ill-handling 911. The heavy rear weight balance made the “short wheelbase” cars a handful to drive near the limit and they often caught even the most experienced drivers in arrears. Spinning backwards off the road was a common thing in these early cars. The lengthened wheelbase effectively moved the bias towards the front wheels and the “long wheelbase” cars were mostly tamed.

The 912 had a motor package that was about 250 pounds lighter and in the “short wheelbase” car, it was fun to use the nimbleness inherent in the rear weight bias and these cars outshined the 911 on any curvy road. Lengthening the wheelbase in a 912 had a similar effect on a 912 as it had in a 911. These “long wheelbase” 912's were more stable in corners and extremely comfortable on the open road. It was a real refinement to the 912 and the cars offer a lovely drive. This was the last year the 912 was built and only 3500 were made, making the 1969 912 the rarest of the 912's. Emissions compliance killed the 912 and unfortunately Porsche gave us the 914 as its replacement. No one celebrated.

This 912 was picked up at the factory by her first owner from Anaheim, California on the 15th of August in 1969. Werner Puttner enjoyed the car in Europe as a tourist and then shipped the Golden Green 912 back to California for a very sheltered life. He put few miles on it here in the States and eventually sold the car to the current owner in 1996. The current owner continued to care for the 912 and it has only registered a little over 64,000 miles today. Of course this 912 is number's matched and rust free.

The 912 was ordered by Warner and his original invoice is with the car from the day he picked it up in Germany. He paid 19,494.00 DM for the car and it included many options. Special order (Golden Green) paint, 5-speed manual transmission, forged alloy Fuchs wheels, radio, antenna, tinted glass, deluxe bumper guards and leather steering wheel. Truly a high and well-optioned 912. We're hoping the next caretaker of this spectacular 912 will treat her as well as her previous and current owners. Come and have a look at this one in the sunlight and you won't be able to wipe the grin off you face!