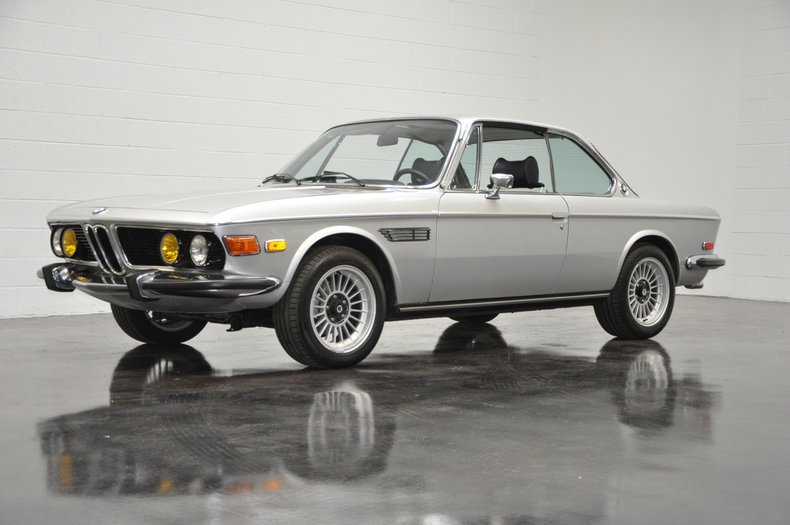 This 3.0CS is a 1974 model. It has a proper conversion to the pre 1973 bumper. Paint quality is very high and the interior is spectacular. This car runs well and has a nice shifting 4 speed with a sunroof. Electric windows and sunroof work as new. The clock works, as does everything. It has a complete tool kit and is well detailed from the trunk to the engine bay. This CS is ready to drive anywhere.

The first of the E9 coupés, the 2800 CS, replaced the 2000 C and 2000 CS in 1968. The wheelbase and length were increased to allow the engine bay to be long enough to accommodate the new straight-six engine code-named M30, and the front of the car was restyled to resemble the E3 sedan. The rear axle, however, remained the same as that used in the lesser "Neue Klasse" models and the rear brakes were initially drums - meaning that the 2800 saloon was a better performing car, as it was also lighter. The CS' advantages were thus strictly optical to begin with. The 2800 CS used the 2,788 cc (170.1 cu in) version of the engine used in the E3 sedans. The engine produced 170 horsepower (130 kW) at 6000 RPM.

Not only was the 2800 CS lighter than the preceding 2000 CS, it also had a smaller frontal aspect, further increasing the performance advantage.

They were sold in the United States from 1970 to 1974, by Max Hoffman. He was the importer and sole distributor for BMW from the mid-sixties until selling his business to BMW of North America in 1975.