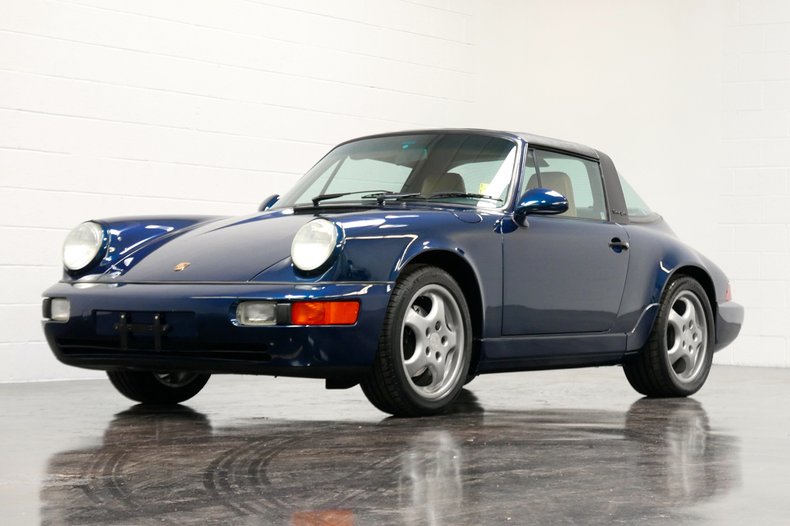 This 1992 Porsche 911 Carrera 2 Targa was completed in November 1991 and finished with Amazon Green Metallic paint (which is a beautiful shade of BLUE) and a Beige leather interior with black accents. Additional options include: AM/FM Radio Cassette, Limited Slip Differential, Full Power Seat - Left and Right and Supple Leather. This nicely optioned Porsche carried a MSRP of $70,986.

This 911 was shipped to Bob Moore Porsche of Oklahoma City, but was sold new by Momentum Porsche of Houston Texas. The car was sold new in June 1992 to the one and only owner it has ever had. The car spent its life in Texas and Southern California as the owner had residences in both places. The Carfax and records on hand confirm regular services in both states and an incredibly low 13,000 original miles. The condition of this 911 is nothing short of spectacular. The paintwork is excellent throughout and is a beautiful shade of blue except in certain lights where a green undertone is visible. The interior reflects excellent care and the low mileage as well with all original surfaces that are in beautiful shape including the beige carpets. Although a service history was supplied to us and we have a receipt for a large service that was done earlier this year by Park Place Porsche, dated March 15, 2017 at 13,401 Miles for $5,766.91, we put the car through a local specialist for a check up. He confirmed all services were up to date and did some minor things like replaced hood shocks and recharged the AC system. This car was originally fitted with 16" Porsche Cup 1 wheels, but the size didn't do the car justice, so we purchased an original set of 17" Cup 1s, installed brand new Michelin Tires and put them on the car.

This is one of just 211 Carrera Targas built for the US market in the 1992 model year and is complete with books, tools, window sticker, multiple keys and a documented service history.