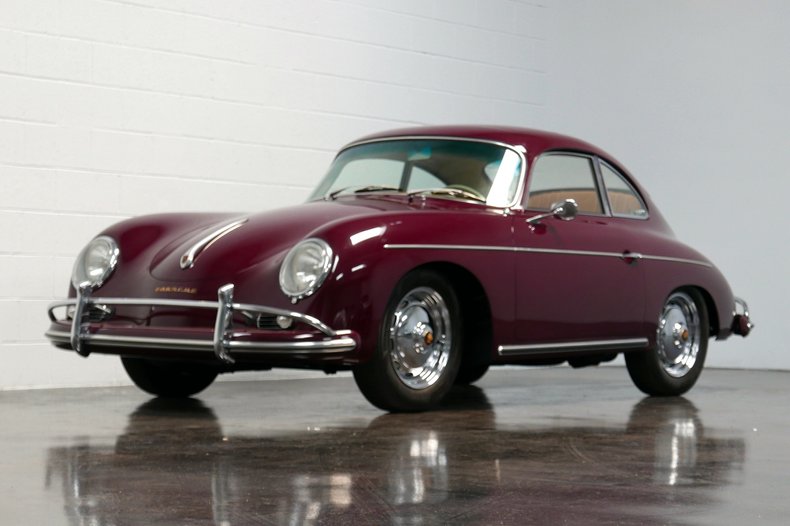 This 1958 Porsche 356A 1600 Coupe was completed at the factory on October 17, 1957 and shipped to the United States where it was reportedly sold new in San Francisco, CA. This car was originally finished in Aquamarine Blue with a Red Leatherette interior and fitted with Sealed Beam Headlights, USA Bumpers and a speedometer that indicated miles.

This is a nicely restored and well-sorted Porsche that retains its original engine, gearbox and opening panels. It was restored in a handsome color combination several years ago and has aged gracefully during the 10,000 miles it has seen since the restoration was completed. During the restoration, the car was stripped and repainted and found to have been quite original. The interior was trimmed in leather using correct carpeting and proper interior detailing. The mechanical systems were all tended to including brakes, tires, shock absorbers, steering damper, and a comprehensive transmission rebuild at that time. As part of the restoration, the instruments were removed and rebuilt by Palo Alto Speedometer. The car is nicely equipped with a clock, full leather interior, Blaupunkt AM-FM shortwave radio, USA bumpers with over-riders and side trim. During this time, a Golde Weathershield sunroof was added to the existing roof. The work was done very well and includes the addition of correct drain tubes in the A and C pillars.

Since the restoration a considerable amount of time, effort and money have been put into the car to ensure its drivability and correctness. A detailed and lengthy invoice is on file from Autosport Designs dated 2011 and another one from 2013. Also on file is an email from 2014 where a former owner, Mr. Preston (Rochester Hills, Michigan), recounts his efforts and expense, which were considerable.

The paintwork was done to high standards and remains very nice, although there are a few small scratches, chips and cracks from normal use. None of this detracts from the otherwise fine driver level presentation. The majority of the chrome on the car was redone and remains in excellent condition, including the wheels, hubcaps, light trims, window trim, and door handles. The glass and lights are excellent throughout, and the headlamp lenses display correct Hella markings. The car shows great attention to detail, including European amber tail light lenses, and transparent red antenna tip. The interior is handsomely finished and trimmed in leather and now shows just the right amount of patina for a car that has been driven. The headliner is beautiful, the square weave carpeting and molded rubber floor mats are the correct type and remain in excellent shape. The dashboard features nicely restored instruments and clock, which all function as expected. The Blaupunkt radio also works, with all switches and controls functional and in excellent visual condition. Competition type lap belts have been fitted, but the interior is otherwise very much as it would have been new.

The engine compartment is very clean, nicely detailed, and correct throughout. The trunk is nicely restored and well detailed, consistent with the rest of the car. The fuel tank was reconditioned and a new rubber mat, washer bag, restored spare and leather strap are all properly retained with the car. The underside of the car has been restored with new floors and undercoating. The car runs and drives very well and has been trouble-free for the few hundred miles it has accrued during our testing process while in inventory. This is an outstanding opportunity to acquire a high quality, desirably equipped 356A. The sunroof added to this well-optioned and matching numbers Porsche makes it an even more appealing car.