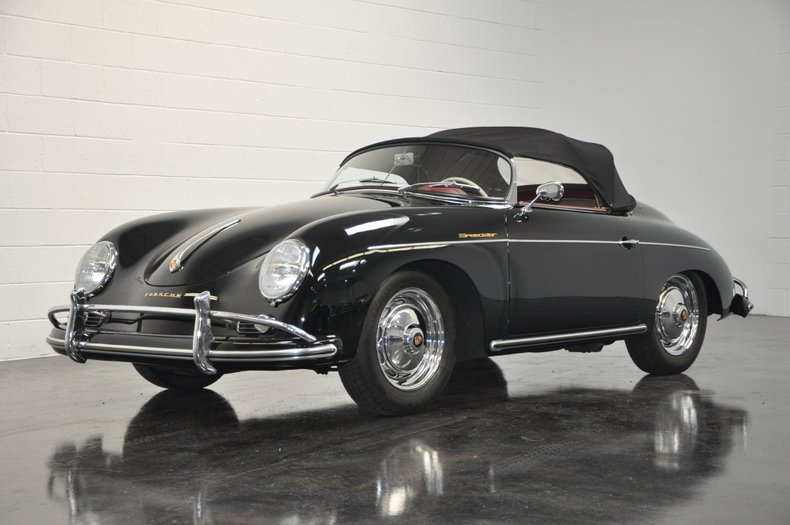 Completed January 20th, 1958, it is the second Speedster produced and one of only 555 356A T2 Speedsters built in 1958. The T2 356A features all of the subtle improvements and updated details fitted to the T2 Speedster over the brief four-year production run. 1600cc normal 60 horsepower engine, 644 manual 4-speed transmission, ZF steering box, relocated shifter, high bow soft top, and four-wheel drum brakes. This Speedster was originally finished in classic Black with Red interior which is the correct color combination. One of only 141 Speedsters special ordered in Black!

European Collectibles sold this Speedster in 2005! This Speedster has been driven locally in California and enjoyed over the past 12 years! It is in excellent condition cosmetically and mechanically and is able to be driven anywhere! Offered with tool kit, jack, owner's manual, side curtains, boot cover and Certificate of Authenticity from Porsche. Amazing condition and an excellent 356 to drive! Truly a rare find!

One of the most desirable collector models is the 356 "Speedster", introduced in late 1954 after Max Hoffman advised the company that a lower-cost, somewhat spartan open-top version could sell well in the American market. With its low, raked windscreen (which could be removed for weekend racing), bucket seats and minimal folding top, the Speedster was an instant hit, especially in Southern California.