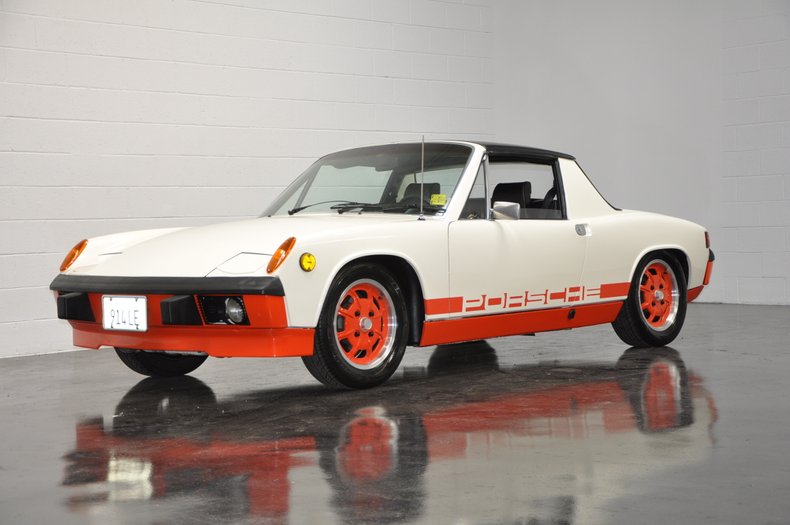 This 914 Limited Edition is in excellent condition, very nicely restored. The paintwork is beautiful with original interior in great condition, new rubbers, and nicely detailed. It is very fun to drive and is in excellent mechanical condition with plenty of horsepower, smooth shifting transmission, and four-wheel disc brakes. It is a true eye-catcher. The 914 Limited Editions rarely become available. Do not miss this opportunity! Complete with paperwork going back to 1975 and Certificate of Authenticity from Porsche.

The Porsche 917/30 crushed all competition in the Can-Am series in 1973, so dominating the series, with Penske driver Mark Donohue winning the last six of eight total rounds, that the SCCA rewrote the rules to essentially outlaw the last of the truly unlimited road-racing cars.

Porsche celebrated its 1,000 plus-horsepower wrecking machine in 1974 by selling 1,000 special 914s, each a 2.0-liter model with a couple of specific options and each available with special badging and only on two separate color schemes.

Known officially as the 914 Limited Edition, or LE, all 1,000 cars were shipped to North America for sales in the U.S. and Canada. Porsche selected the LE moniker because the SCCA simply asked too much for the rights to license the Can-Am name on the cars, though they agreed in principle to allow it.

Along with the regular Appearance Group option (fog lamps and center console with clock and additional gauges) at $300, the LE package set buyers back another $320. What they got for their money, however, were add-ons to make quite the slick-looking 914: a special interior, alloy wheels, a spoiler below the front bumper, front and rear anti-roll bars and one of two unique paint combinations, highlighted by a "negative" stripe that spelled out "Porsche" just above the rocker panels.

Porsche imported 500 cars with black as the primary color and 500 in Light Ivory. The black cars all featured Sunflower Yellow rocker panels, bumpers, spoiler, and wheels, earning the car the "Bumblebee" nickname. The white cars were accented in the same places with Phoenix Red, a nearly orange color, giving rise to the "Creamsicle" name.

Although Porsche made a 1.8-liter engine available as the base engine in the '74 914, all LE's came equipped with the 2.0-liter flat-four, a heavily revised version--by Porsche--of the Volkswagen powerplant and first offered in 1973. Small increases in bore and stroke yielded a 1,971-cc displacement against the base 1,795-cc engine, resulting in a robust 91 hp in U.S. trim, a considerable upgrade over the 72.5-hp Porsche listed for the smaller engine. Acceleration in the roughly 2,100-pound car improved from leisurely to brisk enough to face the rest of the competition in the class--sports cars primarily from the U.K. and Italy.

Despite stumbling out of the blocks with it in 1970, by 1973, Porsche had fixed most of what ailed the four-cylinder 914, primarily with the more powerful 2.0-liter engine. But the engineers also fitted a new gearbox. Earlier 914s, with their notably balky shifting, used a linkage that connected at the far rear of the transmission. The new-for-'73 transaxle featured a connection closer to the front of the unit, allowing for a smoother-acting (if still far from perfect) shifter via a shorter linkage rod.

Magazine reviewers of the day, who had been harsh in some reviews when the car debuted in 1970, began praising the car once the larger engine had been fitted. Handling prowess--truly the car's single most attractive attribute--remained strong, due to a fully independent suspension with torsion bars up front and coil springs at the rear. Unassisted power steering allowed for excellent feedback and control of the lightweight machine with near 50/50 weight distribution. Disc brakes at all four corners provided plenty of stopping power.

Bumblebees and Creamsicles have come back into fashion in recent years. Certainly, rising values and a strong appreciation for originality have helped their cause. Today, these truly limited-edition LE's have gained their own cult following. One source indicates roughly 25 percent of the original 1,000 imported cars remain extant.