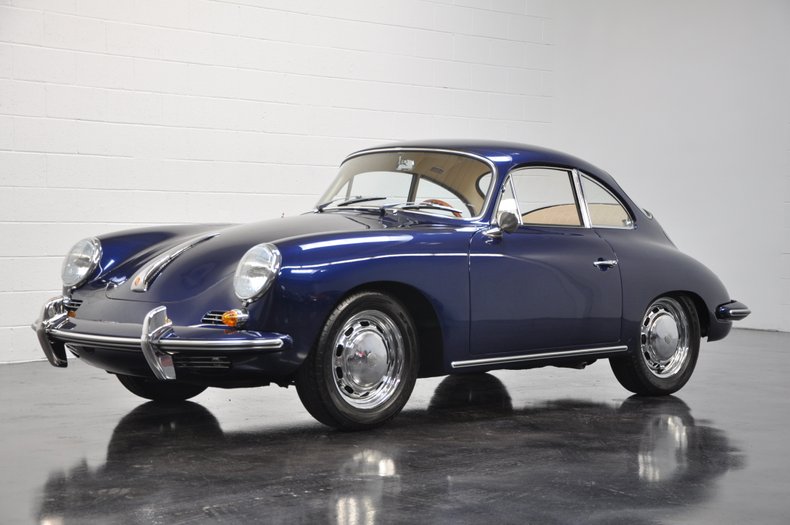 The first owner bought this 356 new from Vasek Polak the Porsche dealer in Manhattan Beach, California. He loved and cherished this 356! But after 40 years of ownership, he sold it in 2004.

The second owner was from Northern California and is one of the biggest strawberry and egg farmers in California. During his ownership, a restoration was done including a complete repaint in dark blue with a new beige leather interior. The paint is in excellent condition along with the chrome work. The gaps and panels fit are very good. The floor pans are original with no rust. The engine was rebuilt in 2004 at 121,540 miles by Swick's Automotive in Salinas, California $13,604 was spent. The transmission was rebuilt as well. At that time the odometer was set to zero after the restoration. 4,392 miles have been driven since. The chrome wheels were recently re-plated and new tires were fitted with Koni shocks.

History
The 356 was a lightweight and nimble-handling rear-engine rear-wheel-drive 2-door sports car available in hardtop coupé and open configurations. Engineering innovations continued during the years of manufacture, contributing to its motorsports success and popularity. Production started in 1948 at Gmund, Austria, where approximately 50 cars were built. In 1950 the factory relocated to Zuffenhausen, Germany, and general production of the 356 continued until April 1965, well after the replacement model 911 made its autumn 1963 debut. Of the 76,000 originally produced, approximately half survive.

The last revision of the 356 was the 356C introduced for the 1964 model year. It featured disc brakes all round, as well as an option for the most powerful pushrod engine Porsche, had ever produced, the 95 horsepower (71 kW) "SC". 356 production peaked at 14,151 cars in 1964, the year that its successor, the new 911, was introduced to the US market (it was introduced slightly earlier in Europe). The company continued to sell the 356C in North America through 1965 as demand for the model remained quite strong in the early days of the heavier and more "civilized" 911. The last ten 356's (cabriolets) were assembled for the Dutch police force in March 1966 as 1965 models.