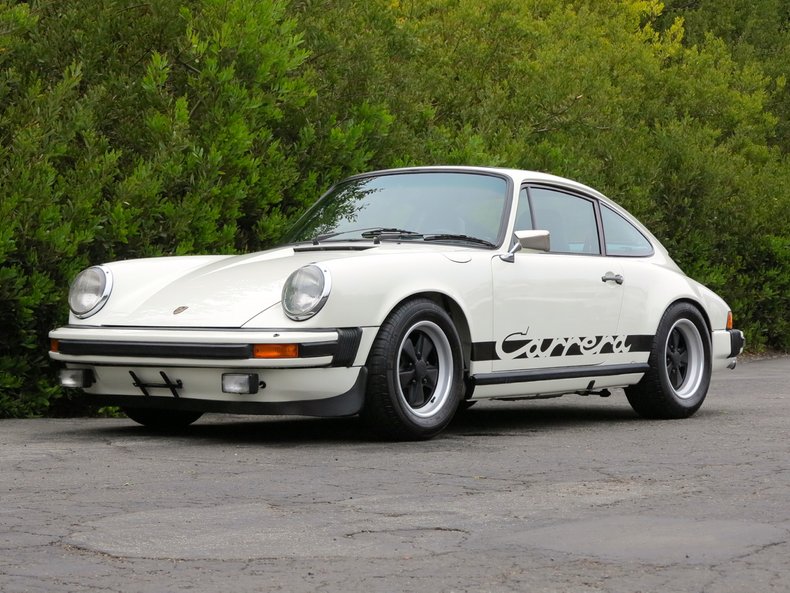 This 1975 Porsche 911 Carrera Coupe is a very desirable "Rest of the World" example that is fitted with the same 210 BHP 2.7L six-cylinder (type 911/83) engine that powered the 1973 Porsche 911 Carrera RS. This car is one of just 508 units produced for the 1975 model year. When it left the factory, it had Silver Metallic paint and a Black Leatherette interior. Additional options included Windscreen Washer System, "S" Brakes, Blaupunkt Radio Bamberg w/ Cassette Player and 2 Loudspeakers, Tinted Rear Window w/Defroster, Carrera Script on Doors - Black, Black Roofliner, Bilstein Shocks instead of Boge, 5-Speed Transmission, Electric Sunroof and Dunlop Tires. The original engine (#6650478) and transmission (#850444) remain in the car today making this a very rare, matching numbers Porsche.

This Porsche was originally sold in Europe and then exported to Japan in 1978 where it remained until 2013 when it was imported to the USA. Upon import to the USA, this car was quickly sold by a Monterey, CA based dealer to a collector in Santa Barbara who began a restoration. Two years later the Porsche still wasn't finished and it was traded to European Collectibles against a 1973 Porsche 911 Carrera RS that was fresh and ready to go. European Collectibles finished the restoration in 2016 and sold it to their customer who has added about 1,000 kilometers to the odometer and spent a significant amount of money sorting the car for ultimate performance. Copies of his recent receipts are on hand.

The body and undercarriage are in good condition with no signs of ever having sustained serious accident damage or rust. The Grand Prix White paintwork is very presentable. The interior which was replaced in 2016 still looks fresh. The wheels have been restored and are wearing fresh Pirelli P6000 tires. The stance and handling are excellent thanks to Southern California's suspension guru, Steve Alarcon of Johnson's Alignment. As previously stated the engine has received significant tuning recently and is running very well. This is a rare opportunity to acquire a matching numbers Porsche 911 with the same 911/83 Carrera MFI engine that powers the venerable 911 Carrera RS from 1973.