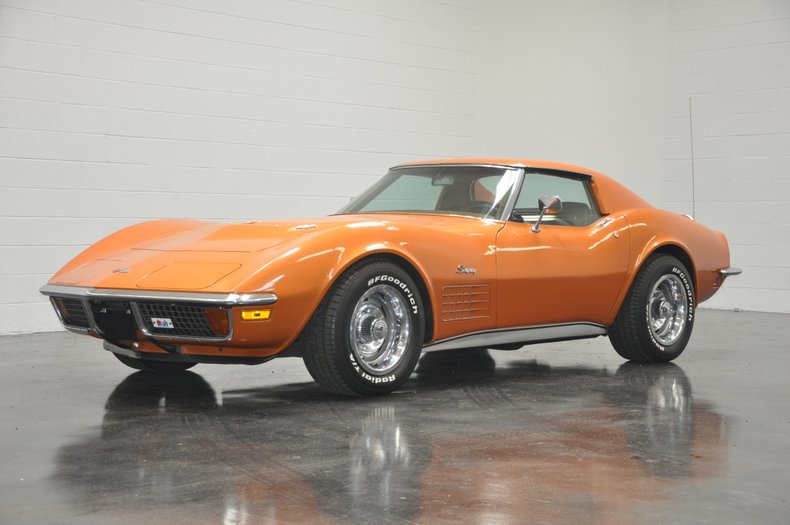 Ownership
Mr. Andre Gaumond purchased this Beautiful Corvette new and owned it until
approximately 1989. He accumulated approximately 48,500 in this time according
to his handwritten notes.

Mr. Jean LeSage, an NCRS Judge, purchased the car from Mr. Gaumond and after
a thorough detailing began to show the Corvette at various NCRS events through
the 1990s as evidenced by the awards and judging sheets.

Ed from Columbia City, Indiana purchased the Corvette from Legendary Motorcars LTD. of Toronto. You know, the Dream Car Garage guys. They purchased the car from Mr. LeSage with approximately 53,000 miles.

Everything works properly, the engine is in a fine state of tune and the Corvette is simply a pleasure to drive!

The Corvette does not burn any oil and operates perfectly on 91 Octane Unleaded fuel.

The frame is very solid with no evidence of rust or rust repair.

All of the body panels and paint are original with all of the original bonding strips in place.

History
The 1972 Chevrolet Corvette is virtually indistinguishable from the previous year and only the horsepower ratings changed. It is notable, however, as the last year of the classic Corvette C3 design with chrome bumpers at both ends. The year 1973 would see a urethane nose, and 1974 would see the car “rubberized” on both ends, with the Kamm tail lost.

The base 350 cid engine was now down to 200 bhp from 270, and the once mighty solid lifter LT1 350 option generated just 255 bhp. Even the 454 cubic-inch Chevy big-block developed a measly 270 bhp. A total of 3,913 buyers paid an extra $294.90 for that, and the motor was not available in California. To be fair, these were net horsepower figures, far removed from the tub-thumping gross numbers of 1969, but they did represent lower compression ratios.

The 1972 Corvettes did not have the 1968-71 fiber-optic light monitoring system, but the horn-connected alarm was now included in the base price.