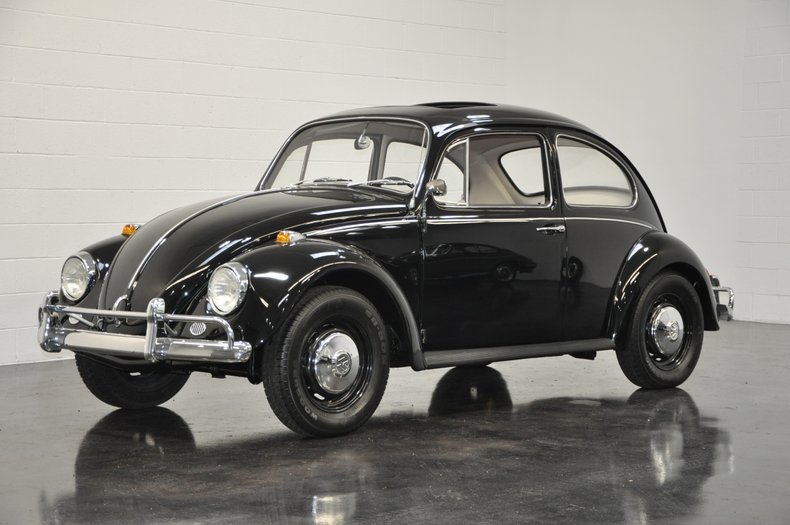 Most Collectible Year for the Beetle! Rare Sunroof. '67 beetle is known for being the last year of the rounded bumpers, full metal dashboard and a 12-volt electrical system. Finished in classic Black with a Red interior. Rust-free and in pristine condition throughout.

For 1967, a yet-again larger-displacement engine was made available: 1500cc, 53 hp (40 kW; 54 PS) at 4,200 rpm. 1200 and 1300 engines continued to be available, as many markets based their taxation on engine size. 1500cc Beetles were equipped with front disc brakes and were identified with a "VW 1500" badge on the engine lid. North America received the 1500 engine as standard equipment but did not receive front disc brakes. These models were identified by a "Volkswagen" badge on the engine lid.

The rear suspension was significantly revised including a widened track, softer torsion bars and the addition of a unique Z-configuration equalizing torsion spring. On US, UK, and Ireland models, the generator output was increased from 180 to 360 watts, and the entire electrical system was upgraded from 6 volts to 12 volts. The clutch disc also increased in size and changes were made to the flywheel. New equipment included a driver's armrest on the door and locking buttons on both doors. Safety improvements included two-speed windscreen wipers, reversing lights (in some markets), and a driver's side mirror. In accord with the newly enacted US Federal Motor Vehicle Safety Standard 108, North American models received a dual-circuit brake system, the clear glass headlamp covers were deleted; the headlamps were brought forward to the leading edge of the front fenders, and the sealed-beam units were exposed and surrounded by chrome bezels. (Throughout the rest of the world markets the 1967 model sold in Europe et al. still retained the older headlights (including its counterparts in Latin America - especially the Brazilian market model retaining the pre-1965 body style). Another oddity of the 1967 North American market Beetle is the rear bumper overriders (towel rails) - the overrides have a different shape unlike the older models besides the one-year-only engine decklid.